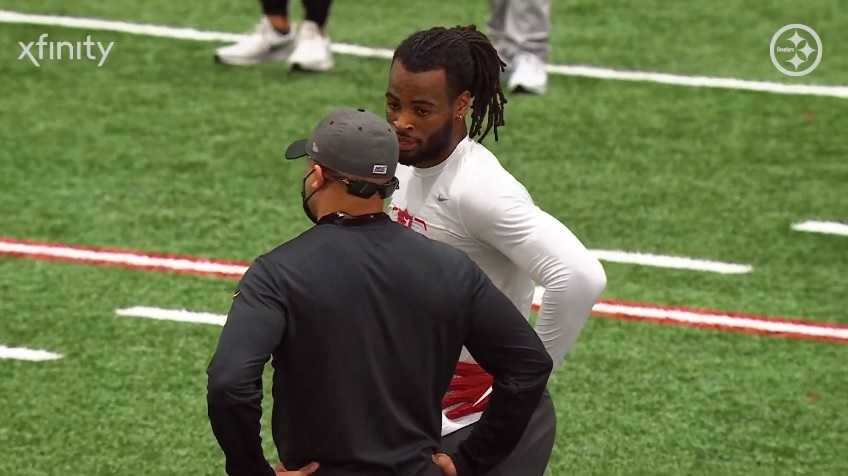 There might be no one in the Pittsburgh Steelers’ organization more excited about the team drafting Najee Harris than his new RBs coach, Eddie Faulkner.

The final edition of The Standard, the team’s draft documentary airing over on their YouTube channel, highlighted Day 1 of the 2021 NFL Draft and Harris’ selection. After the pick was in, Faulkner talked about his pre and post-draft interactions with Harris.

Above all, Faulkner believes the Steelers are getting a diligent and tireless worker.

“One thing I know about him is that he’s a worker,” Faulkner said about Harris. “He’s not afraid, he’s not going to shy away from any of the work or any of the things you ask him to do. Whenever you have somebody like that, it’s easy to work them in.”

Faulkner did not attend Alabama’s first Pro Day due to limitations of the number of personnel each team could bring. At the first session, Mike Tomlin, Kevin Colbert, and Matt Canada attended. Due to injuries and how many prospects were available from the school, the Crimson Tide held a second Pro Day session weeks later. Faulkner was able to go to that one and put Harris through drills. Faulkner explained that experience.

“Then I got him in the drill work and put him through a series of drills. He looked at me like, ‘That’s it Coach? That’s all we’re doing?’ I was like, ‘Yeah, that’s all we’re doing.’ He’s the kind of guy you’re going to have to pull back than wind up. But I’d rather have a person like that than someone I have to wind up every day.”

Harris earned media attention for driving nine hours to Bama’s first Pro Day after his flight was cancelled. Harris didn’t work out the first time around due to a lingering ankle injury, but wanted to be there to support his teammates, a gesture that endeared himself to the Steelers. Kevin Colbert discussed it after the draft.

“Najee did a really cool kind of thing, because he was flying back to the Pro Day that he was not going to participate in because he was still coming off of an ankle injury that he had worked his way through during the season,” Colbert said the night they made the selection.

Harris’ desire to compete and be around the game was evident throughout his college career and during earlier portions of the pre-draft process. He didn’t play in this year’s Senior Bowl due to that ankle injury. He tried to push through in practice, even as those in his inner circle advised him to take things easy. During the Senior Bowl, ESPN’s Todd McShay recounted an interaction between Harris and Senior Bowl Director Jim Nagy.

“His ankle was a grapefruit coming off of that national championship game,” McShay said. “Jim Nagy had to basically tell him, ‘Listen there is no pressure. You don’t have to play. Just show up and interview and do whatever you want.’ And he’s like, ‘No, no, you’re not talking to my agent right now. You’re talking to me. And I’m telling you that I’m going to show up and I’m going to do everything that I physically can do.'”

Harris got into Pittsburgh Friday night. He met with Art Rooney II, front office members, and eventually settled in with Faulkner. They were watching the draft when Faulkner gave Harris a choice.

“We were sitting there watching the draft. He sat down next to me. I was like, ‘We can do whatever you want to do. We can go watch more film because we had already been doing it. Or we can watch the draft.’ And he looked at me like, ‘We gotta go watch tape, don’t we?’ He’s that anxious to get after it.”

“We come in and watch tape,” Faulkner went on to say. “I break down our protections to him. I draw it on the board. I show about two clips. We get to the third clip, I start to talk. He cuts me off and goes, ‘Coach I got it.’ And explains exactly what it was I just talked about.”

Harris is going to be counted on to play right away. The Steelers were desperately searching for a feature back to revive a rushing attack that finished dead last in 2020, struggling in almost every situation. Faulkner praised Harris’ vision, instincts, and power, a complete runner who can thrive carrying the ball or catching it out of the backfield. Harris has a great chance to break the team’s rookie rushing record held by Hall of Famer Franco Harris. Franco had 1,055 yards in 1972.

Check out the final episode of The Standard to recap the rest of the draft and a film session with Faulkner breaking down some of Harris’ best moments.