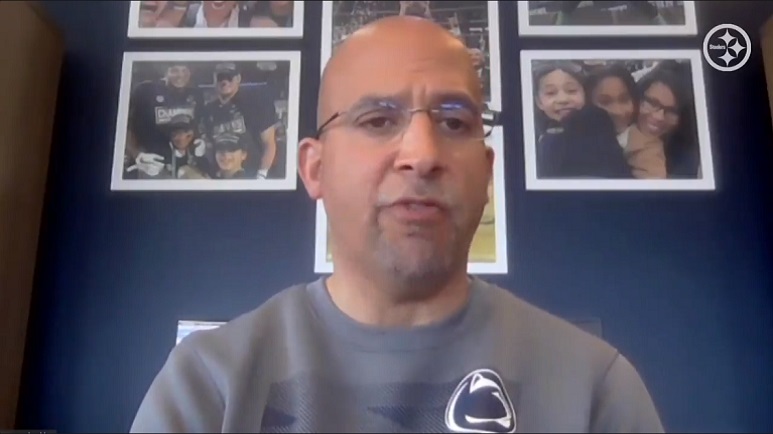 While the Pittsburgh Steelers will undoubtedly use new tight end Pat Freiermuth in the passing game during his rookie season, his primary role in 2021 might just be him being used in the running game as a blocker on the edge. The Steelers certainly could stand to use a better blocking tight end on offense moving forward and especially on the heels of veteran tight end Vance McDonald retiring earlier in the offseason. Recently, Freiermuth’s coach at Penn State, James Franklin, talked about how he expects the Steelers rookie tight end to take to his role as a run blocker on offense.

“Yeah, I think the way I would describe it is again, you know, he embraces his complete role of being a tight end,” Franklin said of Freiermuth to Missi Matthews of steelers.com. “I think there are some tight ends out there that are extremely physical in the run game but are limited in the pass game. There are guys that are really good in the pass game but are limited in the run game. And Pat is more of a comprehensive, complete tight end that can do it all.”

Franklin went on to describe how Freiermuth being a complete tight end should make life a bit easier for new Steelers offensive coordinator Matt Canada in 2021.

“And I think that that becomes fun as an offensive coordinator, because if you’re a tight end that’s really just a run guy or really just a pass guy, everybody talks about creating match-ups with the tight end, but if you know that they’re really only using this guy as another offense lineman, or they’re really only using this guy as a wide receiver, then it’s not as difficult to defend,” Franklin said. “But when you’re a guy that could be lined up as a slot receiver and function in that role, but now also they can motion him back to gain a blocker in the box, that’s where tight ends can become really important in your offense.”

The Steelers running game has been atrocious the last few seasons and that resulted in the organization highly focusing their efforts on fixing that part of their offense this offseason. In addition to making Canada the team’s new offensive coordinator this offseason, Adrian Klemm was made the team’s new offensive line coach after being an assistant the last few years. On top of the coaching staff changes on offense, the Steelers spent their first four draft picks this year on offensive players in running back Najee Harris, Freiermuth, center Kendrick Green and tackle Dan Moore Jr. and helpfully those additions will play a big part in turning around the team’s running game. Franklin certainly believes that Freiermuth will do his part to ensure the Steelers running game improves in 2021.

“He understands, you know, being more of a complete tight end,” Franklin said of Freiermuth. “Some of these guys that they’re calling tight ends now at a college, they’re not really playing tight end, they’re big wide outs. And Pat understands the importance of the running game and the tight ends’ roll in it.”

Our very own Jonathan Heitritter recently posted about how he expects Freiermuth to help the Steelers running game in 2021 and you can read that film room segment at the link below.