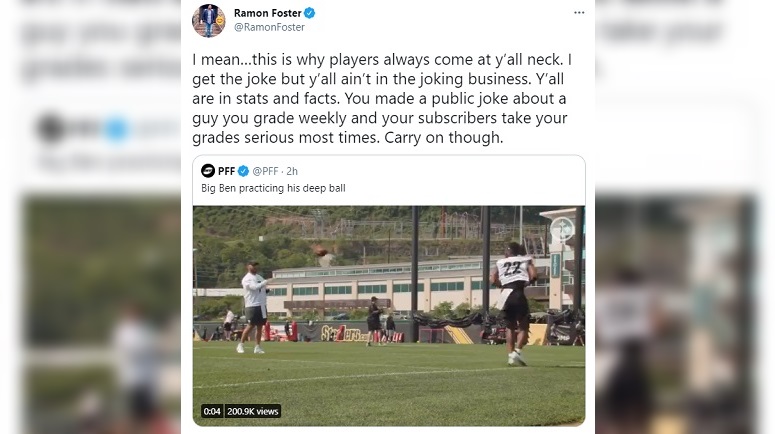 The Pittsburgh Steelers 2021 OTA sessions are now underway and with that, the team has treated us to quite a bit of video clips of players going through the paces on the practice fields. On Wednesday, the Steelers official Twitter account showed a clip of quarterback Ben Roethlisberger working on some short passes with rookie running back Najee Harris and Pro Football Focus decided to make a little joke out of it as you can see below.

While it was a joke in the grand scheme of things and probably based mainly on Roethlisberger throwing a lot of shorter passes in 2020, it wasn’t well received by former guard Ramon Foster just the same as he took to Twitter to somewhat scold the football grading site. As you can imagine, Foster’s tweet received quite a bit of support and especially from Steelers fans. You can see that tweet below.

I mean…this is why players always come at y’all neck. I get the joke but y’all ain’t in the joking business. Y’all are in stats and facts. You made a public joke about a guy you grade weekly and your subscribers take your grades serious most times. Carry on though. https://t.co/ae10KgPXll

What makes PFF’s attempted jab at Roethlisberger even funnier is the fact that they have Roethlisberger down for 76 total deep pass attempts of 20 yards or longer in 2020 and in addition to that, they have just three other quarterbacks, Tom Brady, Matt Ryan, and Aaron Rodgers, as the only ones having more than the Steelers quarterback.

So, it wasn’t so much that Roethlisberger didn’t attempt to throw deep in 2020, it was the fact that he had trouble completing a high percentage of those throws, which is evidenced by his 30.3 percent completion rate on those 76 deep pass attempts.

Yes, for the season, Roethlisberger’s average intended air yardage distance was just 7.1 yards, according to Next Gen Stats and in reality, I think that’s the joke that PFF was attempting to make in their Wednesday tweet.

With Matt Canada now installed as the Steelers new offensive coordinator, it will be up to him to help Roethlisberger not only increase his average intended air yardage distance in 2021 but also his deep pass completion percentage as well. If indeed Roethlisberger can increase both numbers in 2021, the joke might just wind up being on PFF.

If you are one that likes keeping social media receipts, you might want to save the PFF tweet about Roethlisberger.