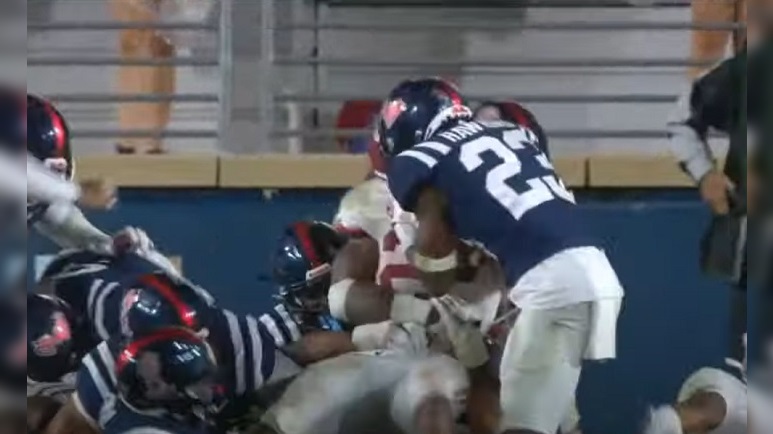 If you like running backs that don’t fumble the football, you’re probably going to love Pittsburgh Steelers rookie running back Najee Harris.

According to Pro Football Focus, Harris only lost one fumble on 719 touches during his college career at Alabama. That is quite remarkable.

He only lost 1 fumble. pic.twitter.com/H2TMyLbUzG

Harris’ only lost fumble at Alabama came during the 2020 season against Mississippi. You can see it below. It’s worth noting, however, that Harris’ forward progress was stopped on the play when the ball was ripped out, so it really is a questionable call.

Najee Harris only lost one fumble at Alabama and it came against Ole Miss in 2020. Forward progress was already stopped, however. #Steelers pic.twitter.com/ppCsqdhdPU

While with the Steelers, running back Le’Veon Bell, who Harris has been compared to quite a bit since being drafted, also had great ball security. He had just four fumbles on 1,541 total touches in his five seasons in Pittsburgh. Former Steelers running back James Conner, who signed with the Arizona Cardinals during the offseason as an unrestricted free agent, lost three fumbles on 624 total touches in his three seasons as Pittsburgh’s starting running back.

Steelers head coach Mike Tomlin has never had the stomach for fumbling running backs, so hopefully Harris now continues on in the NFL with his ball security just as he did at Alabama. Harris figures to register around 300 total touches in his 2021 rookie season with the Steelers.

“Najee has the size, he has the speed, he has the athleticism,” Steelers general manager Kevin Colbert said of Harris right after the team drafted him. “He has the run skills to run inside and outside. Also, he can also play in the passing game as a receiver as a blocker. He’s a three-down NFL back. He played in an NFL system and really his one hidden trait is he finds invisible yards at that second level. There’s times where you think he should just be going down and all of a sudden he finds six, seven, eight yards. It’s just really exciting to get what we think is a three-down back and add him to the team.”