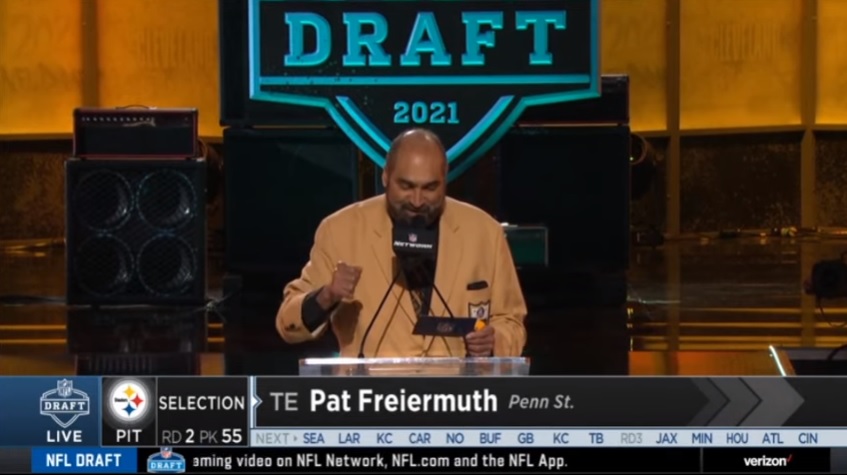 Hearing your name called on draft day is in itself an unbelievable experience. For second round pick Pat Freiermuth, it was somehow even cooler than that. The man who announced his selection was Hall of Fame RB Franco Harris, a Penn State alum himself. That made the moment that much more special.

In a one-on-one interview with Steelers.com’s Missi Matthews, Freiermuth talked about what that moment was like.

“It was a moment that I’ll remember the rest of my life,” Freiermuth told Matthews via the team’s YouTube channel. “Obviously, him being a hall of Famer and everything like that, but just having that Penn State connection. It’s something I’m gonna remember for the rest of my life.”

You can relive the moment before. Harris definitely gives a little extra oomph to the Penn State part. Just an awesome moment.

Harris was the Steelers’ first round selection in 1972 and part of the initial pieces who turned the franchise around. Players drafted before him, Joe Greene in 1969, Terry Bradshaw in 1970, were the foundational blocks. By 1971, the Steelers still weren’t winning. After his first three years, Chuck Noll’s record was 12-30.

After Harris and the 1972 class were drafted, Pittsburgh achieved their first winning record since 1963, going 11-3 in ’72. A season, of course, that included Harris’ Immaculate Reception.

But that’s all history you guys know. To the present, Freiermuth’s moment was made all the more special by Harris’ announcement. Now, he’ll get to work to live up to being the 55th pick of the draft. Unless the Steelers add a free agent tight end, Freiermuth will lead off the season as the team’s #2 tight end behind Eric Ebron. With Ebron’s contract voiding after this season, Freiermuth could enter 2022 as the team’s starter. By then, he’ll have a year under his belt and made the adjustment to the NFL. For most college tight ends, it takes about one season for them to make the jump to the pro game.