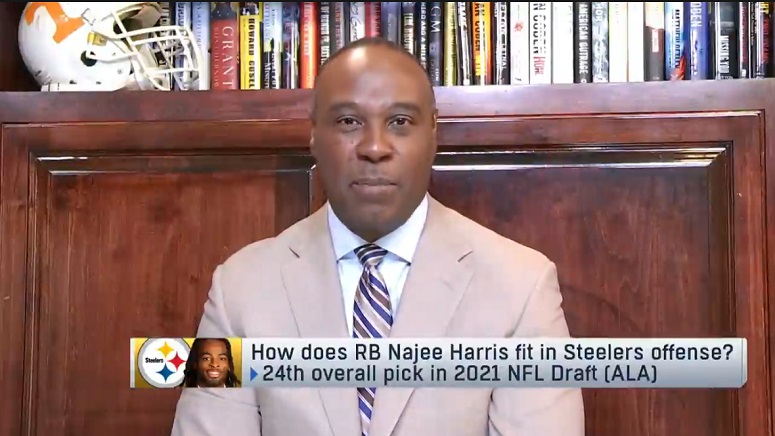 Was former Alabama running back Najee Harris the perfect first round pick for the Pittsburgh Steelers in 2021? Several people believe that’s the case, and Charles Davis of the NFL Network is one of them. Davis, when asked recently about the Steelers selection of Harris in the first round of the NFL Draft, even went as far to compare him to a former Pittsburgh running back that’s in the Hall of Fame: Franco Harris.

“Well, to me the fit is almost perfect,” Davis said. “What would have been perfect is if Franco Harris had announced him as the pick because that was my comp for him. You know, Franco announced, I believe the second round pick for the Steelers, missed it by one round. But a big strong physical guy. I mean their dimensions, 6’2″, 230 pounds. Can run inside, shred a defense, catch the ball out of the backfield, that’s what Najee has added to the game as well. Although we’ll never forget Franco’s hands on the Immaculate Reception, but to me it was almost central casting and that’s where we are.”

Time will certainly tell if Najee Harris can become the next all-time great running back for the Steelers. A good starting place for a journey down that long road would include Najee Harris breaking the Steelers’ rookie season rushing record, which is still currently held by Franco Harris. Should Najee Harris wind up breaking it, there’s a good chance the Alabama product might have a legitimate shot at winning the NFL’s annual Offensive Rookie of the Year Award.

The fact that the Steelers made Najee Harris their first round selection this year should result in the running back touching the football at least 225 times as a rookie. Possibly even much more than that. The Steelers running game the last several seasons has been abysmal. Hopefully, Najee Harris plays a big part in turning that phase of the team’s offense around. Davis sounds like he certainly likes the chances of that happening.

“Just remember, all those backs that were picked later, a lot of them are those dual-threat backs, like Kenneth Gainwell out of Memphis and Demetric Felton out of UCLA, that’s where the game appears to be headed, but Najee Harris, perfect for the Steel City,” Davis said.

I think the Steelers have the blessing of Franco Harris when it comes to the team’s drafting of Najee Harris, as well.

“It’s unbelievable the Steelers picked another Harris,” Franco Harris said after the selection, according to Teresa Varley of Steelers.com. “It’s incredible. Welcome to Pittsburgh.”