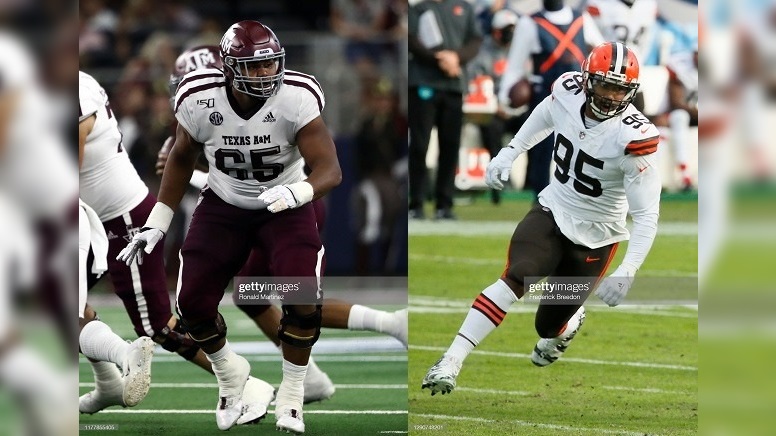 The Pittsburgh Steelers selected former Texas A&M tackle Dan Moore Jr. in the fourth round of the 2021 NFL Draft on Saturday. There’s a good chance he could wind up being the team’s future starter on the left side of the offensive line at some point. While Moore has yet to even participate in his first NFL practice after being drafted by the Steelers, he’s already looking forward to going against one specific defensive pass rusher at the next level.

“Man, I know I’ll be playing against Myles Garrett every year, twice a year, so I’m really looking forward to that,” Moore said Monday morning during an interview on ‘In The Trenches’ on Houston’s Sports Talk 790.

Cleveland Browns defensive end Myles Garrett, who is currently considered one of the NFL’s top pass rushers, also played his college football at Texas A&M. That said, Garrett was gone and in the NFL before Moore got there.

“He left the year before I came,” Moore said Monday morning about Garrett.

While Moore might be looking forward to getting his hands on Garrett in the NFL, Steelers general manager Kevin Colbert said Monday during his interview on ‘Savran on Sports’ on ESPN Radio that the team can’t wait to get their hands on their new tackle this summer.

“Dan is a very athletic guy for his size and, you know, three-year starter at left tackle in a prostyle system at Texas A&M in the SEC, that’s a real good resume,” Colbert said of Moore. “And it was a deep tackle group. But Dan, he’s mature. He’s smart. He is athletic and he’s got the size that you want. So, he’s played on the left side for Texas A&M for the majority of his career there. He may have had some reps on the right when he was a freshman or sophomore, but his ability to play left tackle in the SEC was certainly intriguing. And he’s certainly athletic and smart enough that he could work at both tackles for us. So, again, anxious to get our hands on him.”

Will we see any Moore versus Garret matchups in 2021? While such a matchup is possible, it’s kind of unlikely barring injuries at the tackle position. As things stand right now, Moore will likely begin his 2021 rookie season buried on the depth chart behind starters Zach Banner and Chukwuma Okorafor and possibly even Joe Haeg, who was added via free agency earlier in the offseason. Okorafor is currently expected to be the Steelers’ starting left tackle in 2021, so he’s the one Moore likely needs to overtake on the depth chart.