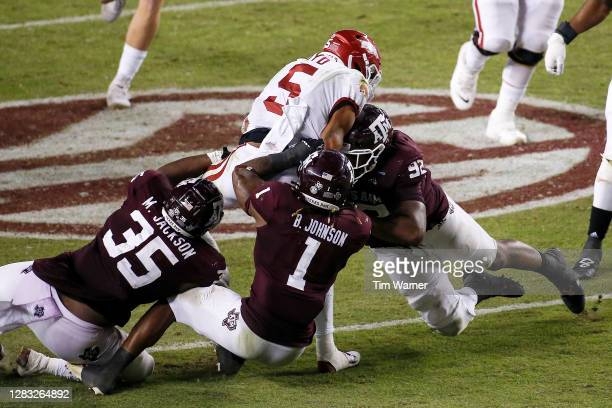 Based on the comments 4th round linebacker Buddy Johnson made a day before rookie minicamp, he’s going to fit in just fine in Pittsburgh. Johnson says he loves playing a physical brand of football and believes the Steelers were the perfect spot for him.

“I love hard-hitting,” Johnson told Steelers.com’s Teresa Varley. “That is the type of defense I like to play. For me it’s great to be a part of the Steelers defense. This is the best thing that could have happened to me, the best situation. I am excited for what the future holds.”

Johnson has average to slightly below average size at 6’1, 229 pounds, but he plays much bigger and more physical than that.

In our pre-draft scouting report, Tyler Wise praised his run defense. Here’s part of what he wrote:

“Johnson’s biggest area of strength is as a run defender. He has quick feet and great lateral agility…once he wraps up a defender, you’re not seeing them get away.  He’s a sure tackler.”

And in my tape breakdown of Johnson’s run defense, I saw a linebacker who takes on blocks, is able to hold the point of attack, and has the hand use to disengage and make the tackle.

After the draft, ILBs Coach Jerry Olsavsky noted Johnson’s downhill mentality was what attracted the Steelers to him.

“One of the first things I want to see how far from the line of scrimmage the linebacker is when the ball’s coming towards him,” Olsavsky said last month. “And when you attack the line of scrimmage, we call that going downhill. And Buddy does that really well. You could tell that he’s been around football long time. He feels comfortable moving with the run and attacking blockers and things like that.”

Johnson will begin showcasing that physicality on special teams. Unless there’s injuries like the team experienced in 2020, Johnson will backup Devin Bush, Robert Spillane, and Vince Williams. That means his role will be running down kicks and punts, something he’s capable of, and clearly has the mentality for.

Overall, Johnson shows a well-rounded game. He’s not quite the athlete like Devin Bush or the run-stopper like Vince Williams. He’s somewhere in-between both those guys but shows the traits to compete for a starting job, possibly as soon as 2022.

But it’ll all begin in 2021 and specifically, today, as rookie minicamp gets underway.