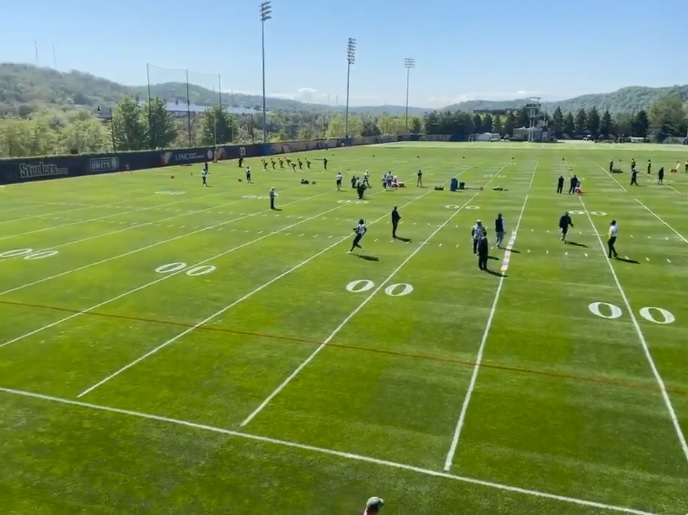 Najee Harris was drafted to be the Pittsburgh Steelers’ featured back.

During this weekend’s rookie minicamp, he’s not only that, he’s the only running back.

As confirmed by the release of the team’s 34-man, three-day roster, Harris is the only eligible RB participating. There’s not even a fullback there to serve as a quasi-runner. For context, in their 2018 and 2019 rookie minicamps, five running backs were invited. And during a typical training camp, there are at least that many and usually one or two more. But with the NFL allowing a max of five tryout players, the team couldn’t bring anyone else in. Those tryout spots were spent on the trenches and quarterback so the team could have a couple of linemen and an arm to get through practice.

So it was a sight to see Harris as the only runner going through drills yesterday, as shared by KDKA’s Richie Walsh. A whole part of the field occupied by two players – Harris and QB Roland Rivers III – when there should be close to a dozen out there.

Granted, these workouts are far from taxing. With such a small roster and limited number of bodies at most positions, the Steelers can’t conduct a regular practice. No one’s in full pads, there’s no contact, they probably couldn’t even run 11 on 11. In some ways, this weekend is more like a walkthrough, getting a feel for a new coaching staff and loosely how an Steelers’ practice functions. Things will ramp up when the full roster is eligible for OTAs and mandatory minicamp and then get into full swing once the pads come on the third day of training camp.

But maybe the team can learn a little bit about Harris’ conditioning and NFL-readiness. Not that it’s in much question, he’s a notoriously hard worker and competitive guy, but it’s a unique situation for any rookie to be in, much less a first-round pick with sky-high expectations.

Ready or not, Harris is handling the load for these next two days. Though just temporary, the fact he’s the only running back feels poetic. Being the bell cow will probably be the role he assumes Week One so it’s nice to get a look at how he handles it now.