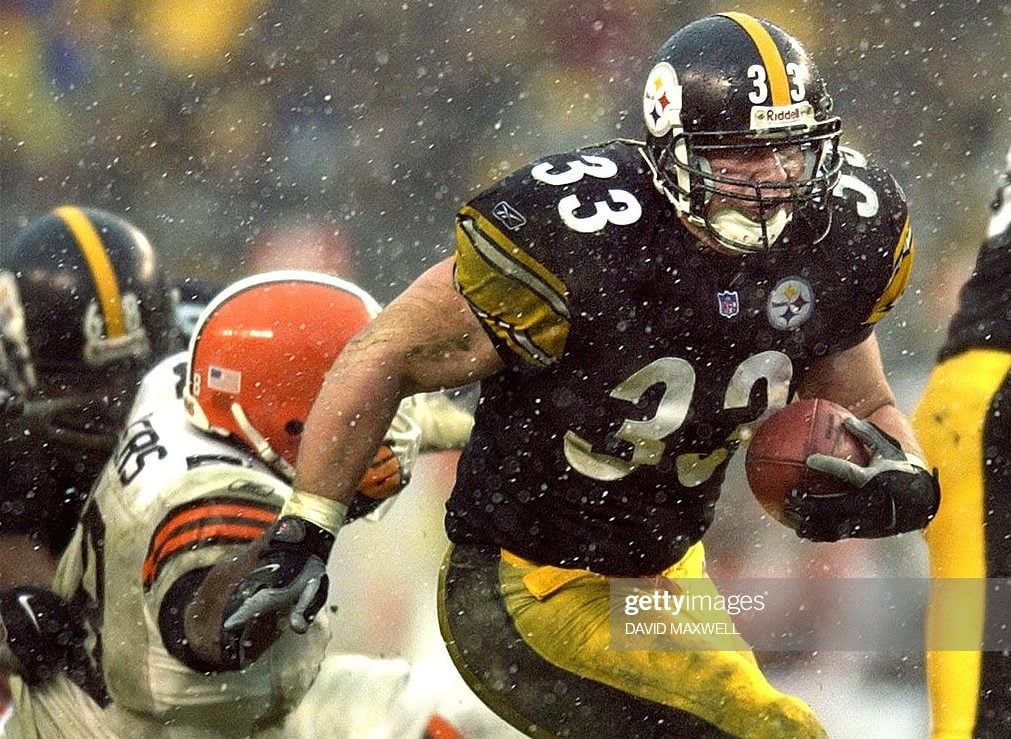 Bowers spent just one year with the team, but there’s a lot to say about his interesting career. An easily forgettable name, he took one of the most unique paths to Pittsburgh.

Born in Hawaii in 1974, he grew up in Western PA and was a multi-sport athlete. His first path to professional sports wasn’t football. It was baseball. In one high school game, he hit three home runs, including a grand slam, for a 10-RBI performance. He was the Barry Bonds of high school baseball while the real Bonds was finishing up his MLB career with the Pirates.

In the 11th round with the 293rd pick of the 1992 MLB Draft, Bowers was drafted by the Houston Astros. Here’s a look at one of his baseball cards. He never made the majors, but he wasn’t one-and-done either. Bowers spent five years in their minor league system. A right fielder, he posted a career slash line of .249/.326/.384 with 37 home runs, including 15 of them in A ball during the 1994 season. He never got past high-A and after spending time in an independent league in 1997, hitting just .220, he knew his baseball career was over.

So he decided to restart his football career.

At 24 years old, he returned home and attended tiny Grove City College, about 90 minutes north of downtown Pittsburgh. He didn’t just start for them. He dominated.

Bowers finished his college career with 7,353 yards and a hard-to-believe 92 rushing scores. Over 2,200 of those yards and 32 of those touchdowns came his senior year. He broke the NCAA record for career rushing yards versus Bethany College and earned a shoutout in Sports Illustrated for it. But Bowers tried to keep things in perspective.

“He rode back to campus with family and friends who had made the 90-mile drive from West Middlesex to Bethany. ‘We ate some pizza and kind of relished the moment,’ says Bowers, who looks forward to surpassing 7,000 yards next Saturday, against Carnegie Mellon University of Pittsburgh. ‘I’m glad it’s finally over. We broke the record, now we can concentrate on winning.'”

To this day, he’s still third all-time in Division III history in rushing yards, surpassed by Mount Union’s Nate Kmic in 2008 and Wisconsin-Whitewater’s Levell Coppage in 2011. Bowers’ yards are still more than any running back in FBS history.

There’s actually a ton of his Grove City games posted on the Internet if you have that kind of time. Here’s just one clip, a short toss right to complete a comeback win over Waynesburg. It’s one of four rushing scores Bowers (#33) — who looks bigger than his linemen — had that day.

So came the 2001 NFL Draft. Like so many players, Bowers thought, and was told, he’d be picked. Including by the Steelers. In this 2001 PPG article, Bowers said Steelers’ legendary RBs Coach Dick Hoak told him he was squarely on their radar.

“At 1:46, Dick Hoak, running backs coach of the Steelers, called. The Steelers had two picks in the sixth round — Nos. 181 and 182 overall — and wanted to let Bowers know he might be taken. Friends and family gathered for the draft shrieked with delight when Bowers told them it was a call from the Steelers.”

Instead, the Steelers took a couple of defenders, DE Rodney Bailey and LB Roger Knight. But the Steelers still wanted to sign Bowers as an undrafted free agent. They weren’t the only team. The Eagles, Panthers, 49ers, Jets, and Colts also showed interest. Bowers, for reasons unclear but probably money/opportunity related, signed with the Carolina Panthers, something that was so underreported I didn’t even realize it when I included him in our “All-Undrafted team” series.

There’s a reason for that. His time with Carolina was brief. They carried him throughout camp but released him towards the end of August as they trimmed their roster down to 68.

Yet again, Bowers found his way back home and to Pittsburgh, signed to their practice squad on September 3rd. Due to injuries to Jerome Bettis and Amos Zereoue, Bowers appeared in his first NFL game — a 27-year old rookie —  December 23rd, 2001 against the Detroit Lions. A 47-14 blowout win for the Steelers, Bowers and fellow FB Dan Kreider touched the ball on six of the last seven Steelers’ snaps, capped off — inexplicably — with a rushing score by backup QB Tommy Maddox.

Here’s Bowers’ first snap and carry, a three yard gain, on a toss left side and friendly shoutout from the FOX crew.

Bowers would end the day with a lunch pail seven carries for 17 yards.

In the regular season finale, a comfortable win over the Cleveland Browns, Bowers got another shot to carry the football. Filling in for Chris Fuamatu-Ma’afala, who injured his groin in the third quarter, Bowers ran 11 times for 67 yards and his first — and only — NFL rushing touchdown, a 21-yard score on 3rd and 1 to salt the game away. Awesome moment.

“It’s a tremendous feeling,” Bowers would say after the game. “Just awesome. I can’t even explain it. I’ve been trying to find the right words for a half hour and I can’t. You can’t write it any better.”

But that would be the end of his Steelers career, though not the end of his NFL one. He was picked up by the Browns for 2002 and 2003. He would only touch the ball once more but made it count, catching a two-yard pass from Kelly Holcomb for a touchdown (I can’t find any footage of that play, unfortunately).

That would mark the end of his career. He’s credited with appearing in eight games with 18 carries, two receptions, and two touchdowns. He’s still the only Grove City alum since 1935 to appear in an NFL game. He was inducted into the Mercer County Hall of Fame last January.

I haven’t been able to find much about his post-NFL career aside from hosting some local softball games about a decade ago.

A pro baseball and pro football player, R.J. Bowers, your blast from the past.