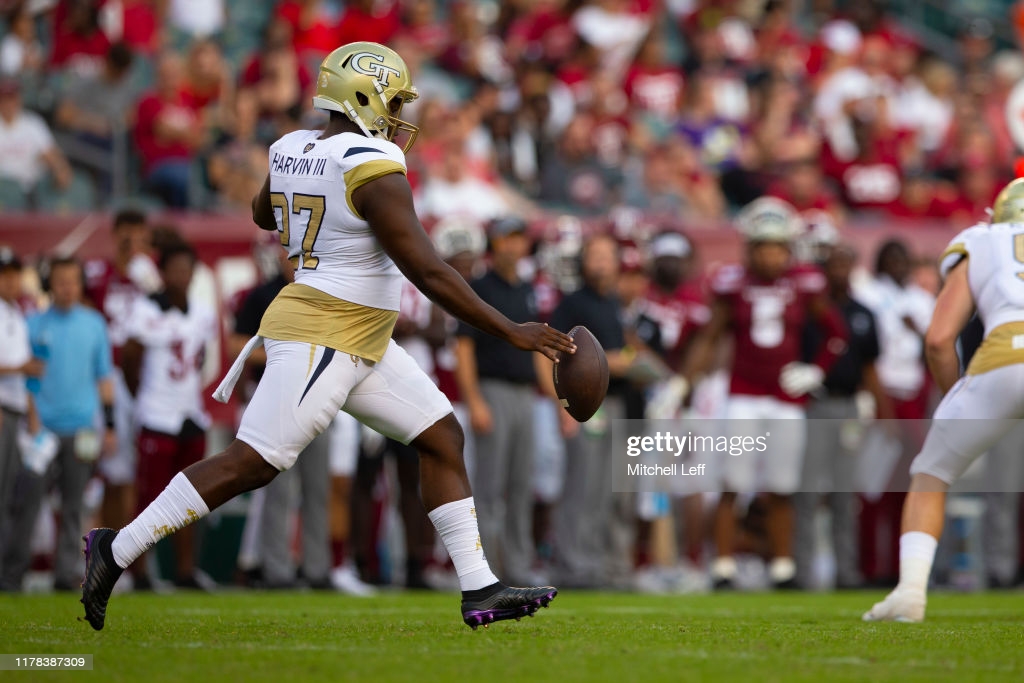 The Pittsburgh Steelers finished their draft class off in style, taking 263-pound punter Pressley Harvin III with the 254th overall pick. Most fans have fixated on his unusual size, understandably so. All Kevin Colbert cares about is his ability to punt the football. Speaking with Jim Miller and Pat Kirwan on Sirius Radio, Colbert broke down what they liked about Harvin’s game and where he still needs to improve.

“You know, the first time I saw him was his junior year. I was down there for the Georgia Tech, Georgia game,” Colbert told the show. “And I was like, wow, this kid can bang the football. And technically, he still has some room to grow with his drops and his steps. All the little things that he’ll continue to pick up. But as you said he had a great year this year. He was the Ray Guy Award winner. And he’s probably not tapped out as far as what he can do. Even when he misses a ball, it usually goes far.”

Harvin averaged a career-best 48 yards per punt in 2020 on his way to winning the Ray Guy Award as college football’s top punter. That average was far and away the best mark in college, almost a full yard ahead of second place and well over a yard better than the next draft-eligible punter.

Pittsburgh deemed him worthy as competition for Jordan Berry for the starting punter gig. The Steelers cut Berry before Week 1 last season, but brought him back a month later after Dustin Colquitt struggled to replace him.

‘We’re excited to throw him into the competition. It was seventh round, let’s get the guy who we felt was draftable. You usually don’t draft specialists too often, but we felt he was draftable and he has certainly has the leg strength. Now we’ll see if he can find the consistency to compete and maybe win a job.”

There’s only a handful of instances of Colbert drafting a specialist. Harvin III was only the third such example. The first was punter Daniel Sepulevda in 2007. That move probably would’ve worked out had it not been for Sepulevda’s recurring knee injuries. The second was long snapper Colin Holba in 2017. He was the heavy favorite to win the job but lost out to Kameron Canaday and Pittsburgh cut him outright. Holba bounced around between the Jaguars and 49ers, appearing in 19 career games.

As Colbert said, Harvin III does need to improve his consistency. Here were the negatives we listed in our pre-draft scouting report.

– Unusual, stocky build, probably should drop weight for the NFL
– Inconsistent punter, tendency to shank too many kicks
– Only one year of elite production
– Low percentage of punts were downed inside the 20 (32.3%, 68/210), number did increase to 40% senior season
– Didn’t get to play in any All-Star games (invited to NFLPA Game but in-person game wasn’t held)

If Harvin III can find that consistency, he should easily beat out Berry for the starting gig. If not, the Steelers will release him. He had the traits worth drafting. Now it’ll be up to him, and STs coordinator Danny Smith, to make him a complete punter worthy of the investment.