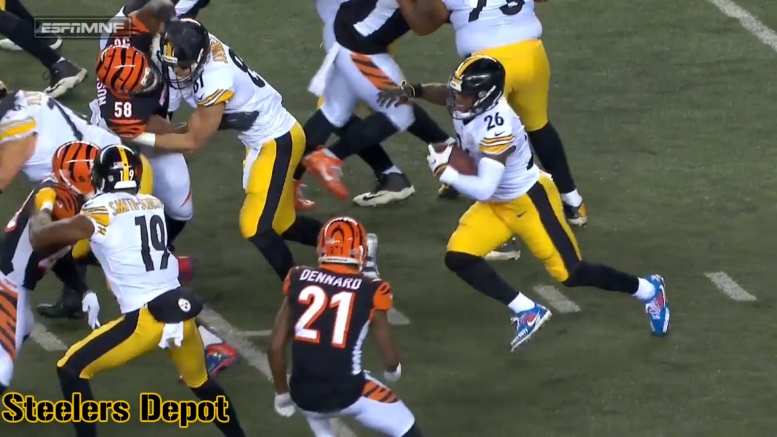 If there is one area in which the Pittsburgh Steelers struggled last season above all others, it would have to be the run game. While they were, overall, one of the very least efficient offenses in the entire league in terms of yards produced per play, and in play success rate, the run game undoubtedly lagged behind the passing game.

We’ve gone into this numerous times over the course of the past six months, so I don’t think it’s crucial to dig up the specifics, but a lot has changed over the course of the past couple of months, including who’s carrying the ball, who’s blocking, who’s instructing those blockers, and who’s calling the plays. That’s a lot of variables to account for, to the point where we can’t coherently say a great deal about what to expect or how successful anything might be.

Wide receiver JuJu Smith-Schuster understands the importance of getting the ground game back on track, however. The Steelers had a pretty solid complementary rushing attack during his first two seasons, first with Le’Veon Bell and then James Conner. Now it’s rookie Najee Harris.

“I think we just have to stay true to our run game, and mix it up”, he told Mike Florio yesterday about how to address the run game this offseason. “I think a lot of the times we love to throw the ball, and I don’t mind it. We throw and we catch and we run it. But at the same time, we have to go in there, we have to block as receivers. We have to block as tight ends. And it’s going to be very interesting year to see how the run game plays out”.

While changing your primary ball carrier is obviously a significant move, having different blockers and different coaches are arguably as notable, and we have yet to see how Adrian Klemm’s approach and Matt Canada’s play-calling will shape this outfit. But we are starting to get an idea of who will and will not be in the trenches.

“Not having Maurkice Pouncey as our center, as a captain, will be tough. Not having Al on the outside. I think our only vet guy will be Dave DeCastro”, Smith-Schuster said. “You have Zach Banner, Chuks, but Najee Harris is a huge commitment for our offense. Now James Conner is not with us anymore and I’m just very curious to see how that’s gonna play out, but more heavy on the run game and moving players around”.

It would be hard to imagine them not running the ball more this year. They had the fifth-fewest rushing attempts last season with the most passing attempts, and a lot of that was simply due to the fact that they weren’t having success putting the ball on the ground. Time will tell if the changes that they have made will work out for the better.