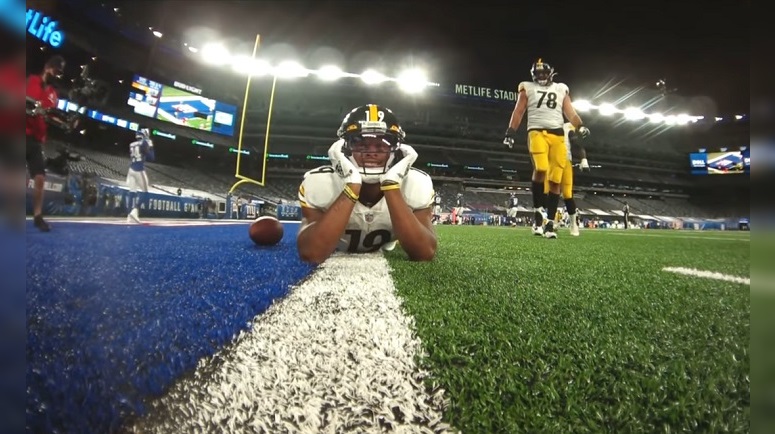 Pittsburgh Steelers wide receiver JuJu Smith Schuster is an extremely easy player to root for, in my honest opinion. Sure, he likes being on social media a little too much for the liking of some. But he really is a good-hearted individual and player who constantly gives back to not only communities, but fans as well. All that said, it’s not surprising to see that Smith-Schuster made a list of 32 players to root for in 2021 that Adam Rank of NFL.com put together on Tuesday.

Rank chose one player from all 32 NFL teams that he feels deserve rooting for in 2021, and Smith-Schuster was his choice for the Steelers. Below is his reasoning for choosing the Steelers’ former second-round draft pick out of USC as one of his 32.

I find his whole, I totally would have signed with Kansas City if the Steelers hadn’t reached out thing a little dubious. It’s kind of like how I once claimed I was going to make an eagle, but my friend had left the rake outside of the sand trap and I hit it. But it was disturbing to me that so many people took issue with JuJu having a little fun on the field last year. I mean, this game is supposed to be entertaining, right?

Would Smith-Schuster have re-signed with the Steelers had he received a much stronger free agent offer from the likes of the Kansas City Chiefs and Baltimore Ravens? Probably, but that’s what unrestricted free agents do. That said, Smith-Schuster genuinely wanted to be back with the Steelers in 2021 and he essentially took less money to do just that in the grand scheme of things. That needs to count for something, if only a little bit.

As for Smith-Schuster’s social media habits and a few unthought out comments made since entering the NFL, that stuff happens. His opposing team logo TikTok dances that most were up in arms about last season probably wouldn’t have been as big of a deal as they were had the Steelers not fallen off a cliff after their 11-0 start. Optics, however, are everything a lot of times. I think Smith-Schuster’s slowly beginning to learn that.

Have you ever taken the time to notice just how much Smith-Schuster’s organization does and has done the last few years? It’s worth your time if you’re not up to speed on that. Smith-Schuster walks a pretty straight line overall, and he certainly gets the Steelers culture, and the way organization likes to do business. He’s not a troublemaker, and appears to be the ultimate teammate in the locker room as well.

This will certainly be an interesting season for Smith-Schuster, with it again being another contract year. If the Steelers are going to make any serious playoff run in 2021, they’ll need Smith-Schuster to play a big part in that happening. So, yes, Smith-Schuster’s love of social media might bother a few, but we have seen players with far greater issues than that come through the Steelers organization over the years. He very much is worth rooting for in 2021 and beyond.