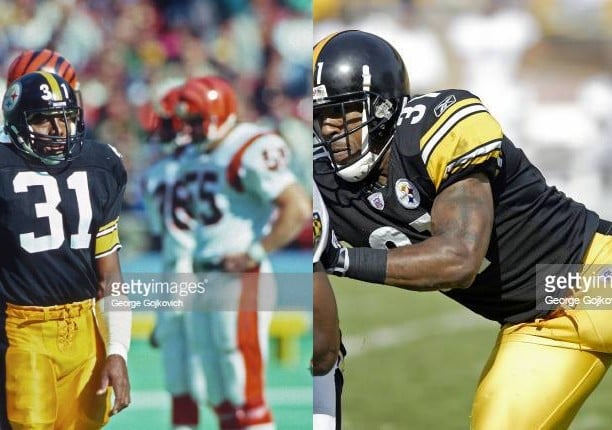 Two numbers in Pittsburgh Steelers history are retired. #70 for the late, great Ernie Stautner, one of the toughest and most durable defensive tackles of his era. And #75, Joe Greene, officially done so in 2014. Many others remain in unofficial retired status, no longer issued by the team. #12 for Terry Bradshaw, #52 for Mike Webster, #58 for Jack Lambert.

But with only so many numbers to work with and 90-man offseason rosters, there’s no way for the Steelers to avoid handing out the jersey number of every great player. This isn’t baseball or basketball with much smaller roster sizes. So though it may have felt weird to see, Kendrick Green immediately taking Maurkice Pouncey’s #53 jersey shouldn’t come as much of a surprise. That type of thing has happened many times in Steelers’ history.

Shell is the great story of undrafted free agent to Hall of Famer, though his induction into Canton took far longer than it should. He wore #31 for his entire career, 1974-1987, all spent with Pittsburgh. For more than a decade, it seemed as if he would have his number unofficially retired just like those names above.

But 14 years later, that number was brought back. Worn by Mike Logan, who signed with the Steelers as a free agent for the 2001 season to a three-year pact worth about $3 million. Logan wore #32 with Jacksonville but was given #31 for reasons I’m not entirely sure of. Logan wore it for the entirety of his Steelers’ career, winning a Super Bowl in 2005, and the number was put back into the rotation. Since Logan, six different Steelers, all DBs, have worn it: Fernando Bryant, Curtis Brown, Mike Hilton (for one season), Nat Berhe, and Justin Layne.

This is a weird one. Ham was one of the core components of the Steel Curtin and a sure-fire Hall of Famer the moment he retired. Every Steelers’ fan knew what he meant to the 70s dynasty. So when he retired in 1982, I’m sure most figured that number would be done for good.

But in 1983-1984, LB Todd Seabaugh wore it. He was the team’s 3rd round pick in 1983 and perhaps viewed as Ham’s heir so maybe the team gave him 59 as a vote of confidence. In fact, that’s how team Director of Player Personnel Dick Haley compared Seabaugh after making the pick.

“He has 4.7 speed and excellent overall agility,” Haley told the Pittsburgh Post-Gazette. “He can cover the pass and catch the ball. There aren’t many guys who compare to Jack Ham but this is a guy like Jack Ham.”

He was, in fact, not. Seabaugh didn’t play at all his rookie season and never started a game for the Steelers, playing 16 games in 1984 but never suiting up for Pittsburgh or any other team after. Wearing Ham’s number was the only thing those two had in common. 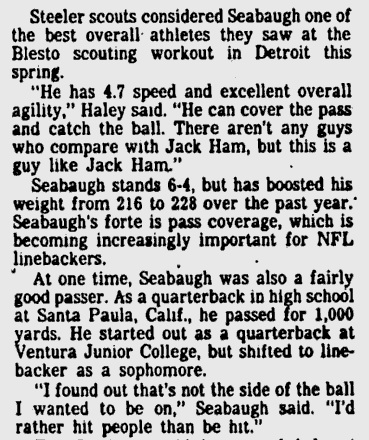 Maybe this one was a little different because Faneca went to another team, signing with the New York Jets for the 2008 season, as opposed to retiring and walking off into the sunset. Hills was drafted in the third round of the 2008 NFL Draft as an athletic tackle out of Texas. But he carried injury concerns, suffering from dropfoot that hurt his draft stock, and he quickly became an NFL journeyman. He spent nine seasons with six different teams. Just three with Steelers and he was only healthy for one, 2010.

David DeCastro picked up #66 when he was drafted in 2012 and has worn it ever since. Fair to wonder if this number will go away for good after DeCastro’s Steelers days are through.

Jack Butler was one of the greatest CBs of his era and one of the best Steelers of the pre-Noll era. After a knee injury prematurely ended his career, he got into coaching. And the team immediately gave out his number. Butler’s playing days were over in 1959 and by 1960, defensive linemen Joe Fowlkes was wearing it. For one year, anyway.

There is an incredibly limited amount of information of Fowlkes whose stay with Pittsburgh came and went in the blink of an eye. A rookie in 1960, he hailed from Baltimore and was released on August 19th or 20th, 1960 replaced by a fellow linemen, Ron Stehouwer.

And…that’s about all we know. There’s hardly any record of him aside from a newspaper clipping and his name being included in the team media guide. 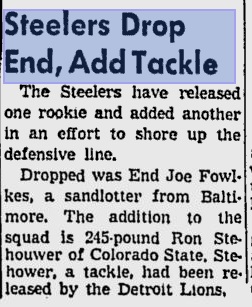 There is a Joe Fowlkes listed here as playing for the AFCL Providence Steam Rollers for several seasons in the early 60s. He’s listed as hailing from Baltimore so I assume it’s the same guy but I can’t 100% verify it. If it’s the same Fowlkes, he went on to lead a chapter of the NCAAP for over 15 years. He passed away last November with many attending his outdoor funeral.

No Steeler wore #80 again until WR Wayne Capers did in 1983, the team’s second round pick that season. He played just two seasons for the team. Today, that’s number is worn by offseason signing Mathew Sexton.

Stallworth was one of the last members of the Steelers’ dynasty when he retired in 1987. His #82 was vacant for just one season until picked up by Hill in 1989. Hill was drafted in the third round of the 1989 draft, a lanky receiver out of Arizona.

Hill was drafted not so much to be the next Stallworth but as a strong #2 alongside Louis Lipps. He was regarded as a first-round talent who had a terrific college career but dropped due to rumors about a gambling debt. Hill denied the allegations.

Almost like Limas Sweed, the Steelers thought they were getting a steal.

“Some people had him very high,” WRs coach Dwain Painter told the PPG. “There were people who thought he was next to Andre Rison, that he may have been the second or third receiver in the draft…everybody’s a little surprised he lasted that long.”

Hill made some big plays in two seasons for the Steelers, averaging exactly 16 yards per catch, but the volume was low. He caught only 53 passes across two seasons and was out of football by 1991. #82 has been worn regularly ever since, quickly scooped up by Yancey Thigpen for the 90s. It was last worn in the regular season by TE David Johnson in 2016. Today, futures contract WR Tyler Simmons sports it. 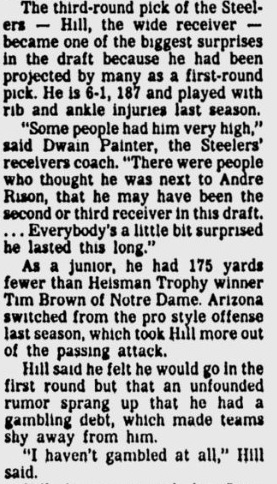 1983 ended up being a pretty important year for these “in the shadow” guys. And Chuck Noll wasn’t afraid to hand out those dynasty jerseys in a hurry. Swann hung up his cleats after 1982 and by 1983, Dunaway took it over.

An 8th round pick in the ’83 draft out of Michigan, he was a tight end who appeared in 11 games as a rookie but never caught a pass and didn’t play a regular season game for any other team. Pittsburgh waived him the following August.

According to his LinkedIn profile, he’s now the VP/Director of Client Services back in Michigan, a job he’s held for over 25 years. His bio included his time with the Steelers and you gotta hand it to this guy for being able to tell a story.

“Played TE and on special teams for the 1983 AFC Central Division Champions. Appeared in 19 regular, pre- and post-season games in 1983-84. Scored a TD in my next-to-last preseason game and, perhaps sensing I may never return to the end zone, acted like I’d never been there and spiked the ball as hard as I could. Then high-fived my way to the sideline like my hair was on fire. “Retired” a week later. Though my retirement from the Steelers was completely involuntary, I take great pride in knowing I went out at the same time as Terry Bradshaw, Franco Harris and Mel Blount. Someday, I hope to join them in Canton, maybe for lunch.”

Dunaway is also a PA native, born and raised in Upper St. Clair.

#88 has been worn several times since Swann (and Dunaway). The number got bounced around throughout the 80s, once held by strike-star Joey Clinkscales, and then worn by names like Andre Hastings, Emmanuel Sanders, and Darrius Heyward-Bey. Rookie tight end Pat Freiermuth was given that number for 2020.