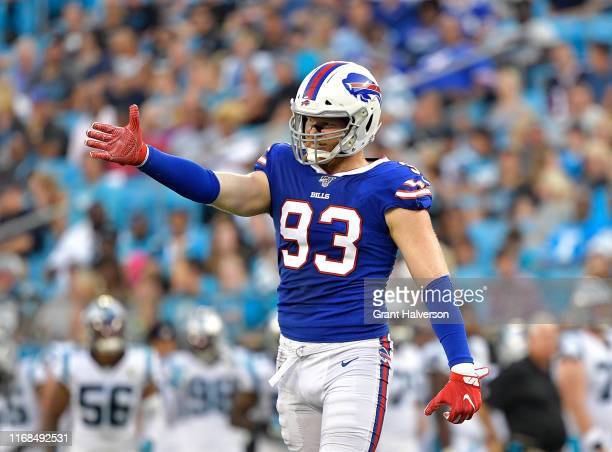 This week’s report the Pittsburgh Steelers showed interest in EDGE Ryan Kerrigan, who ultimately signed with the Eagles, was notable for two reasons. One, it proved there was some level of desire to sign a defensive player over the age of 30, something Kevin Colbert basically never does. Two, it showed some recognition they need to add more depth at EDGE rusher.

Now, we don’t know exactly what level of interest they had in Kerrigan. At best, they offered him a minimum-level deal and proceeded to get a dial tone on the other end (this phone call takes place in 1998). Unfortunately, the EDGE market beyond a guy like Kerrigan is very thin, especially for guys who will play for peanuts. Melvin Ingram and Justin Houston are probably out of the team’s dumpster-diving price range.

But if you want to circle one name, I’d look towards Trent Murphy. He turned 30 this past December. But if the Steelers were willing to bring in the going-on 33-year old Kerrigan, Murphy hitting the big 3-0 shouldn’t alone take him off their board. Murphy spent the last four years in Buffalo, picking up 11 sacks over that span. He missed his first year with the team after tearing his ACL. Just two of those sacks came in 2020, so it wasn’t a surprise to see the Bills, whose pass rush was middling (38 total sacks), let him walk.

Take this rep against the Seattle Seahawks in Week 9. Murphy, #93, aligned as the LOLB. He bench presses the tight end, sets the edge. The three-tech is able to blow the play up and spill the ball outside. Combined, they keep the running back wide and down the line, converging for a loss of three.

Over the last two years, Murphy has 55 total tackles. Twelve have been for a loss. That’s 21.8%. In his last two years with the Steelers, Bud Dupree’s TFL rate came in at 24.2%. Not too far off, especially when you consider the skill (and price) gap.

Overall, he has several similarities to Kerrigan. The size, the run defense, the pedigree (Murphy a second round pick), and they played in Washington together.

It’s hard to imagine Murphy commanding really anything more than the minimum. Kerrigan’s deal is worth “up to” $3.5 million, which means there are likely playing time/production incentives. Kerrigan is the better player who had at least three teams interested in him. Murphy isn’t as good, and his market seems light. He’d be an attractive option as a #3 outside linebacker behind T.J. Watt and Alex Highsmith. The pass rush production won’t be great. But I care more about run defense with that type of backup. If you can’t play the run, you can’t play defense for the Steelers. And those are the question marks that surround Cassius Marsh and Quincy Roche, the only semblance of depth currently on the depth chart.

Probably the biggest issue with bringing a guy like Murphy in is his general lack of special teams value. He’s played only around 65 snaps there each of the last two seasons. I’m guessing that came on a single unit like field goal block, given his size and length. That’s not going to change as he gets older. But the Steelers have plenty of linebacker help capable of doing that. So worst-case, you end up with a James Harrison-type situation and deal with it for 2021. Worth the price of 15-20 solid defensive snaps per game and injury protection if a starter gets hurt, like what happened to Bud Dupree a year ago.

Their best options are to sign a guy like Murphy or wait until roster cutdowns right before the start of the season. The downside there is you’re adding a player at the last second, jumping on a moving train right before the regular season begins.