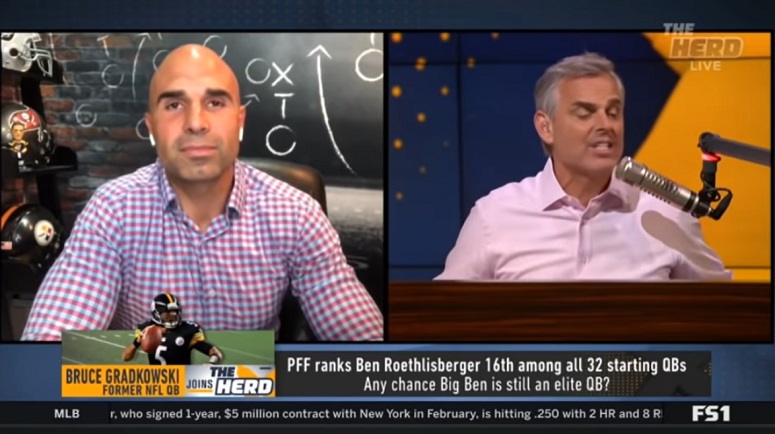 On Tuesday, former NFL quarterback Bruce Gradkowski released his rankings of the top 32 quarterbacks in the NFL for 2021 on Pro Football Focus. Within them, he had Pittsburgh Steelers quarterback Ben Roethlisberger ranked right in the middle at 16th overall. While Gradkowski did provide a short synopsis in that rankings post of why he had Roethlisberger ranked where he was ranked, he was pressed to give more thoughts on his former Steelers teammate being ranked in the middle of the pack during his Tuesday afternoon interview on The Herd with Colin Cowherd.

“Well, I’ll tell you what, I had some response within PFF telling me, ‘Man, you put him too high on the list. He should be lower,'” Gradkowski first explained. “So, I think with Ben, look, he came back from an injury, so this year it’s going to depend on, is he another year healthier or is he really almost done playing? I think they have the weapons around him receiver-wise, I have some concern with their offensive line. But there’s a reason why he had the most pass attempts from the shotgun. He had the most pass attempts under 10 yards. They were 26th in explosive play percentage. So, I mean, it’s going to be a big year and it was hard for me to have him where he is, but I also got some feedback that they thought he should have been even lower.”

Basically, Gradkowski just said right there that he feels like he did justice to Roethlisberger because his peers and bosses at PFF really thought that the Steelers quarterback should have been ranked lower than 16th overall.

Gradkowski then went on to tell show host Colin Cowherd that he feels Roethlisberger’s 2021 season really depends more on the play of the Steelers’ offensive line and how much new offensive coordinator Matt Canada can impact things in his first season in that role on the team’s coaching staff.

“But in my mind, look, I’ve been around the guy,” Gradkowski said of Roethlisberger. “He’s the most competitive guy I played with. Most accurate. As good of a passer I’ve ever seen up close and personal. He just makes it happen. And I’m hoping this year he takes some of this with a chip on his shoulder and he can do what he can do because I’ve seen him execute in the most high-level situations — come from behind after throwing three interceptions. So, it’s tough, but I think where Ben’s at, I think he has the weapons around him, but it’s still, it’s going to be interesting because that Steelers offensive line, that’s going to be a little rebuild, and what does Matt Canada, the new offense coordinator, do to help this offense and have more explosive plays.”

I found it interesting Gradkowski never mentioned the Steelers addition of running back Najee Harris and tight end Pat Freiermuth via the 2021 NFL Draft as reasons why Roethlisberger might ultimately wind up justifying why he was ranked 16th overall for 2021. That noted, I think it’s obvious that Gradkowski thinks a little bit more of Roethlisberger than the rest of Pro Football Focus does with the start of the 2021 season now a little more than 16 weeks away. To me, 16th overall seems fair, as it’s essentially the best of the rest. Based on what we saw last season, that’s probably the best way to describe Roethlisberger ahead of his 18th NFL season. It’s now up to him to prove otherwise.