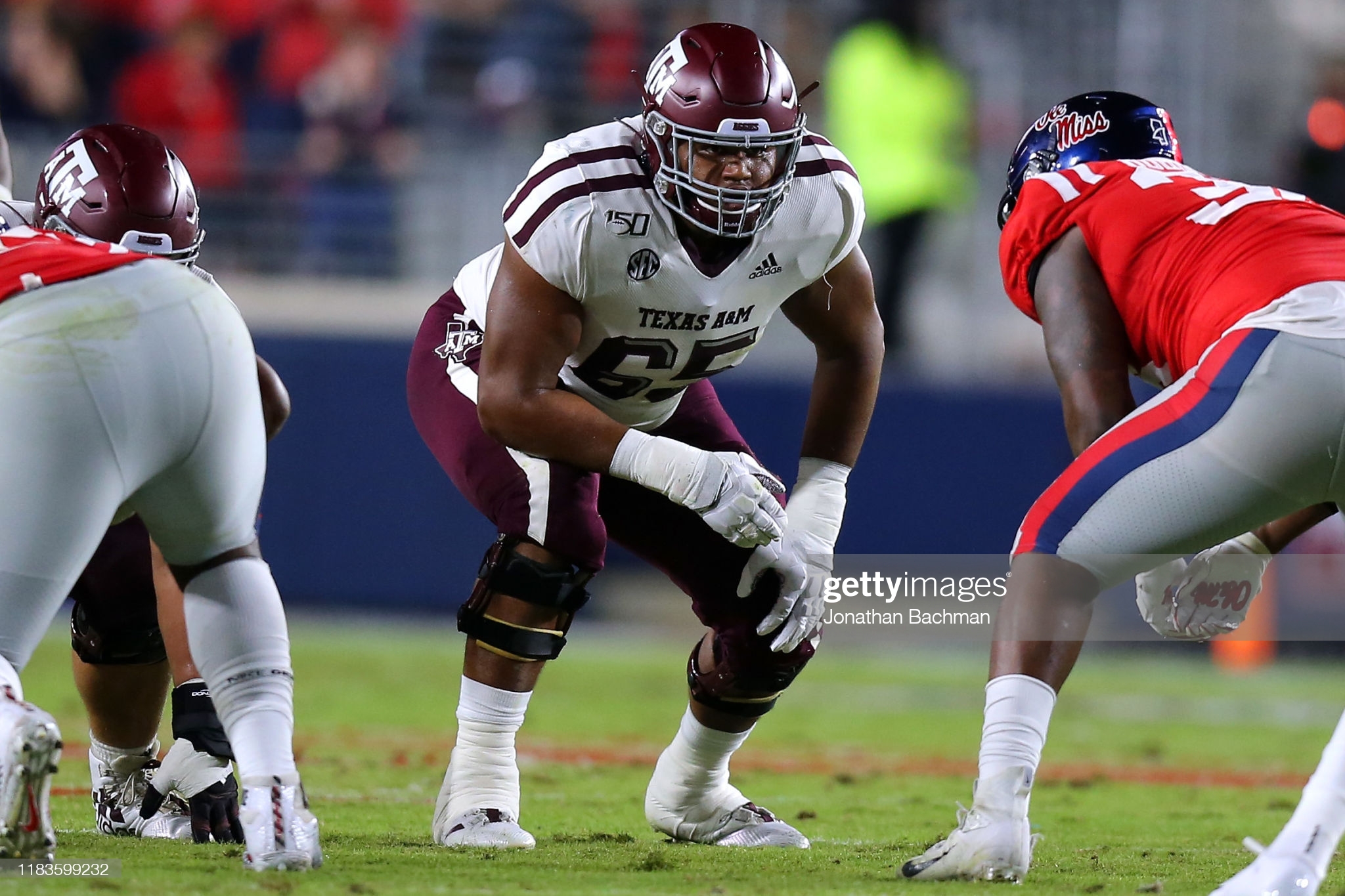 With the 128th selection in the 2021 NFL Draft, the Pittsburgh Steelers selected Dan Moore Jr. out of Texas A&M. Many in the draft community expected Pittsburgh to address the need at tackle earlier on in the draft, but they elected to wait until the fourth round to select Moore after addressing needs at running back, tight end, and center. Moore ended up being the selection for the Steelers, which proved to be a head stretcher for several reasons at first glance.

Moore wasn’t linked much to the Steelers in the pre-draft process, and he primarily played in a zone system with the Aggies. However, once word got out that Assistant OL Coach Chris Morgan attended Moore’s Pro Day, that he participated in the Senior Bowl, played football this past season for a Power-5 conference team, and that OL Coach Adrian Klemm mentioned that the team would be looking to implement more zone looks in OC Matt Canada’s system, the selection of Moore made a lot more sense.

Now after doing a deep dive into Moore’s tape, more specifically his play in the run game, I came away rather confused as to how to feel about the selection a week after the fact. Sure, you see the measurables and athleticism on display with his ability to get out in space and use his long arms to get defenders pursuing the football, but his lack of consistency and nastiness in the run game left me wanting more.

He often played pensive and allowed defenders to get angles on him in pursuit, and despite having great arm length and hand size, he also frequently struggled to sustain his blocks. Moore also has a real issue with generating power in the run game with his lower half. Often times he pops straight up on contact, resulting in a stalemate at the LOS or even getting pushed back into the backfield.

Let’s go to the tape. Here on the first few clips we see the Aggie run game using Moore successfully on down blocks. This first clip we see Moore climb to the second level and get hands on the LB, washing him down and out of the play. While the DE blows up the play in the backfield, Moore correctly executes his assignment.

Another example against the Tigers where Moore picks up the defender trying to shoot his inside gap, down blocking him away from the play and clearing a hold on the left side.

Now on this play against the Volunteers, we see Moore get good initial contact off of the snap on the DE trying to crash inside, knocking him off balance and not allowing him to penetrate the gap.

When Moore wants to, he has good lateral agility to perform reach blocks and to slide down the line to stay in front of defenders on inside zone runs. We see that here as he moves his feet laterally against the Commodore defense, staying engaged with his man across from him with good hand placement and creating a hole to his left for the back to hit.

He is effective at the combo block with the guard off to the linebacker in the box and can either wash him down or kick him out of the play to spring the back free in the second level of the defense. A good example is here of Moore working up to the backer against Clemson and kicking him out to allow #28 Isaiah Spiller to cut inside and pick up a big chunk gain up the middle.

While the tackle class had unusually short arm lengths this year, Moore was one of the few that surpassed that infamous 34” threshold. This arm length aids in getting first contact on defenders and shocking them back, preventing them from getting inside a blocker’s chest. Here is a good example of Moore using his length to engage #11 Isaiah Simmons at the LOS, pushing him back just enough to keep him from getting in on the short-yardage play.

For being the size he is, Moore moves really well in open space. Not only is he comfortable climbing to the second level, but he is an effective puller from the tackle spot, hence why some draft analysts considered him as a potential move to guard. Here are a couple instances of Moore pulling to the opposite side of the field and picking up a body. Notice in the second clip he engages the defender, but throws a body shot rather than engaging and driving him back, resulting in the defender bouncing off of the block. Moore gets his man covered up on the play, but this is an issue that will be highlighted.

One of the big issues with Moore’s game is his inability to stay engaged on blocks for extended periods of time. His play strength is pretty average to below average given his size and frame, lacking the necessary power in his punch to knock defenders back on the snap or to adequately use his large hands as vice grips to lock onto his opponent. Here is an example from the Clemson game where Moore reaches the defensive end on his side but isn’t in great position with one arm outside of the defender’s shoulder and lacks the base to sit in and replace his hand placement, losing the block almost immediately and allowing the defender to run down the back from behind.

Sometimes, Moore will flat-out whiff on his block attempts from the snap. Here against the Tar Heels, Moore fails to shoot his hands through the defender’s chest on the snap of the football at the line, allowing the defender to cross his face and shoot inside, disrupting the back in the backfield and causing him to have to jump cut and bounce it outside where the defense rallies to him, rather than Moore executing his block and running up the middle. Moore gets his guy on the ground, but in the end, his failure to win initially at the LOS leads to the blown play.

While Moore is a good athlete for the tackle position and can move well in space, he plays too pensive too often. He needs more of that urgency to get a body on a defender and drive him back instead of watching and waiting for someone to come to him. Good example here, where Moore knows he has the blitzing LB up the middle, but he hesitates and doesn’t commit to the side shuffle to pick him up, allowing the LB to shoot the gap and get past him to get to the runner in the backfield.

Sure, Spiller breaks out of the tackle and gains a couple of yards, but the lack of commitment by Moore to get to his landmark and cut off the backer or flat out go and meet him as he is coming is troubling to see. He mainly just shoots his hands in hopes of slowing him down instead of moving his feet laterally or forward to get the job done.

One of the biggest problems in Moore’s game as a run blocker and pass protector is his lack of overall anchor. He has a relatively thin lower half and can struggle against power at the LOS, often times getting driven back into the lap of the QB or the runner if he doesn’t get a good initial push on the snap. Here we see the defensive lineman of North Carolina long arm Moore off the snap, getting him extended and walking him back into the backfield, requiring the runner to cut it outside to the sideline compared to where all the open green grass was on the right side of the field.

When Pittsburgh made its selection, I instantly got Jerald Hawkins vibes from a few years prior as an experienced, athletic tackle coming out of the SEC with the tools and pedigree the Steelers are going to love. After watching more of Hawkins tape in comparison to Moore, I stand by my comparison. For starters, let’s just compare the measurables of the two players side-by-side.

Now when you watch Hawkins play both at LSU and in the league, you see a similar type of player. He too is comfortable moving in space for his size and can climb to the second level to pick up linebackers and spring his runner for a big gain as we see here is a clip against Texas Tech.

He is also very capable on down blocks and using his length to his advantage in terms of getting his long arms on a defender and extending them away to keep them from impacting the play, as we see on this rep against the Buccaneers in the preseason a couple of years ago.

However, the same issues with power and consistency at sustaining blocks with Moore show up in Hawkins’ game, as well. We see on this rep Hawkins line up on the end of the LOS and is responsible for the OLB, the defender who weighs more than 50 lbs. less than Hawkins. The OLB knocks him back and gets him extended, pushing him into the lap of #7 Leonard Fournette. That results in a tackle near the LOS for no gain.

Overall, there is some evident positive traits to Dan Moore Jr.’s game that would encourage Pittsburgh to make him their selection in the fourth round. He is a good athlete and has the length, experience, and play style to fit in a zone system should that be the move Canada has envisioned going forward. However, while the positive traits closely resemble that of Jerald Hawkins, the negatives are there as well with the lack of sand in the pants, consistent physical demeanor and urgency, and play strength at the point of attack to move defenders off of their spots.

He will need to gain size and functional strength in order to hold up in the current system if Pittsburgh looks to still incorporate power into their offensive system and will need to serve as a swing tackle/jumbo TE eligible role while he takes a year or two to refine his technique and get stronger. It makes me believe the team basically wanted to take a chance on a guy they are familiar with in terms of a similar evaluation to Hawkins and hope this time around it pans out. However, weighing his upside and facets of his game needing addressed, I currently have a hard time envisioning Moore as anything more than a career backup or spot starter due to injury if Pittsburgh strives to have quality tackle play and endorse that physicality they desperately need in the run game.