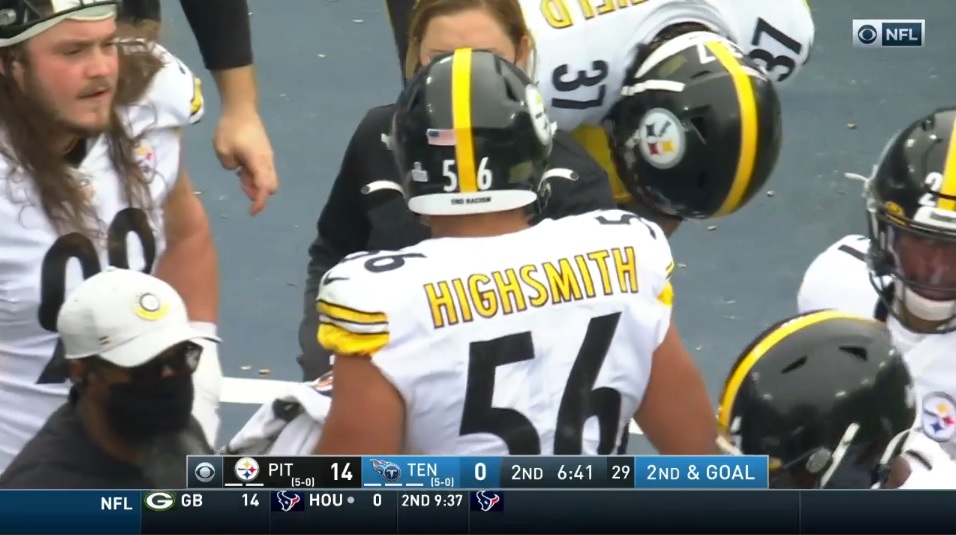 OLB Alex Highsmith was the Pittsburgh Steelers 3rd Round selection at #102 overall in the 2020 NFL Draft and played mainly a reserve role to start the season until Bud Dupree went down with an ACL tear late in the season. For being a rookie, Highsmith showed flashes of brilliance in the limited play time he saw as both a reserve and a starter, displaying great effort in pursuit as a pass rusher along with several fluid pass rush moves including an inside spin, cross chop, inside swim, along with showing good bend around the edge on a standard speed rush. His pass rush arsenal is fairly refined for his first season in the league, giving off the impression that he only has more room to grow into a quality #2 edge rusher across from T.J. Watt heading into his second season.

Coming out of Charlotte, it was hard not to fall in love with Highsmith given the effort he played with on a snap-to-snap basis. He was asked to play all over the defensive front, lining up as an undersized 4-I and 5-technique his first couple seasons before transitioning out to more of an edge role where he played with his hand in the dirt and in a standup position. What stood out on tape was his burst up field and his ability to work down the LOS, crossing a blocker’s face as he went to make plays in the backfield. We see that translate here in Pittsburgh, as he starts on the edge but comes downhill inside to the guard, getting hands-on and is able to shed the block and make a play on #31 David Johnson in the backfield.

Highsmith normally didn’t have an issue with holding his own on the edge, especially when matched up on TEs. He showed good pop off the snap, being able to stack and shed the block to make a play at the LOS or in the backfield while keeping his outside leg and arm free to man the edge. Here we see him on a couple of plays get good hand placement on the TE’s pads and yank him forward, making a play on the runner in the backfield.

Highsmith was also successful at properly engaging OTs at the line as well, keeping his shoulders square, getting good hand placement on the shoulder pads, and using his quickness to disengage and make plays. We see that here against #78 Cornelius Lucas, getting the push/pull with the inside arm rip through as he hits the back in the backfield, limiting him to a one-yard gain.

However, in my notes while scouting Highsmith in 2020, I highlighted that he needed to be more consistent at stacking and shedding against the run to get off blocks as well as should add more strength to his lower half to avoid being driven back by power and size. There were instances where Highsmith looked overmatched, like this play against #89 Drew Sample of the Bengals where, to Highsmith’s credit, he was too far inside of the formation, putting him in a tough spot to get the edge. However, Sample gets a hold of him and washes him out of the play, running him to the sideline and giving a big gap for the back to bounce it outside for a nice gain on the play.

While you love to see Highsmith’s aggressiveness and motor run hot on every snap, he does need to play more controlled at times, especially when he has outside contain on the edge. Here against the Bengals, we see Highsmith crash inside hard on the option run to the running back, allowing #5 Ryan Finley to tuck and run the ball to the outside with open field in front of him for a first down. Now Highsmith would later right his wrongs and stay on the QB keeper on a similar deigned play, but he does need to play more assignment sound consistently especially when facing the likes of Lamar Jackson in division twice a year who can take it all the way for six.

So how does Highsmith compare to what he is trying to replace at this very moment? As said here many times on Steelers Depot, Bud Dupree was one of the best run defenders in the NFL. His size, speed, and explosiveness are freaky for the OLB position and his knowledge and awareness improved every season in Pittsburgh, making him a well-rounded run defender. There are some instances of Dupree’s game that are similar to Highsmith in terms of run defense. Dupree also often casually defended blocked on the edge against TEs, being able to stack and shed them with ease and make plays in the backfield. While Highsmith has shown the ability to do the same, he just isn’t as physically imposing as Dupree is from an athletic perspective. For instance, we see here Dupree matchup with #85 George Kittle of the 49ers, pushing him into the backfield and ripping him off to the side to make a play on the back for minimal gain. Given Kittle is viewed as the best blocking TE in the game, I question whether Highsmith would be able to win the matchup as successfully.

Having nearly 20lb off mass on Highsmith and being far more explosive helps Dupree as well when taking on blocks against offensive linemen against the run. He defeats tackles routinely with his stack and shed and has the strength to anchor in against pulling guards and hold his ground, keeping his outside leg and arm free to still keep outside contain and make a play as he does here against the Ravens. The fact he is able to stonewall #70 Marshall Yanda coming on the pull and stay upright while making the play on the running back is something you are frankly not going to see often from an outside linebacker.

While Dupree is a certified freak of nature, his awareness does show up quite a bit in run defense. Unlike Highsmith’s rep above where he crashes too far inside and gives up outside contain, Dupree recognizes the QB keeper and keeps his outside leg and arm free against the blocker coming in motion across the line, accelerating to the sideline to cut off #1 Kyler Murray and bring him down for no gain on the play.

This is not to knock the run defender that Alex Highsmith is. In actuality, Highsmith held up fairly well against the run for his first season in the league and a lot of issues he had are fairly correctible with improved play recognition and technique at consistently getting off blocks. However, this does point to the drop off that is to be expected going from Dupree from Highsmith, given Dupree’s other-worldly traits as a phenomenal athlete. While the drop off should be noticeable, I do think that Highsmith will be more than capable of holding his own against the run going into year two should he correct some of those mental errors from time to time. The same highlight plays we saw from Dupree may not be there, but he definitely won’t be a liability against the run either like some edge rushers are. Should Highsmith be a solid B-grade run defender and take the next step as a toolsy pass rusher, the Steelers will likely be sold on a young player on the rise starting for only a fraction of the cost.