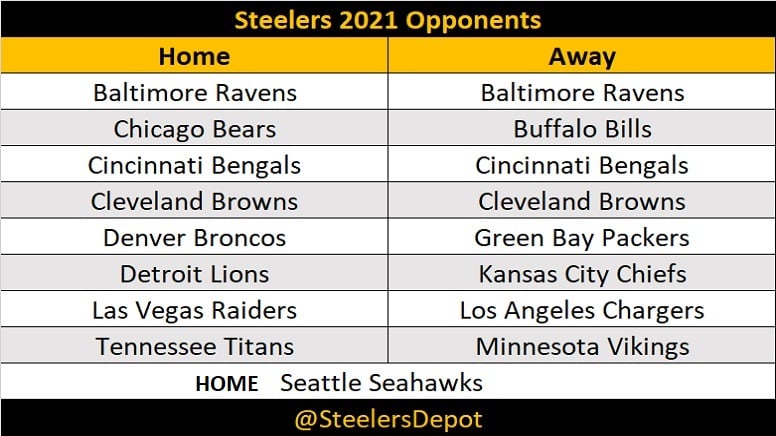 Based only on 2020 win percentages of all NFL teams, we’ve known for quite some time now that the Pittsburgh Steelers were going to have a tough regular season schedule in 2021. Now, according to new data posted Monday by Mike Clay of ESPN, the Steelers also have the hardest schedule in the NFL in 2021 based on current team rosters following the 2021 NFL Draft.

2021 NFL strength of schedule based on current rosters.

Note that the order of games is random. Green = easiest #clayprojections pic.twitter.com/2mLS6A07Bb

While we won’t know the Steelers’ exact order of the teams they’ll play in 2021 until the official NFL schedule is released on May 12, we have known since the 2020 season who they will play both home and away. Since they won the AFC North division last season, the Steelers will play fellow first-place AFC teams Buffalo and Tennessee in 2021.

As usual, the Steelers will also play their division rivals, the Baltimore Ravens, Cleveland Browns and Cincinnati Bengals, twice each in 2021. Pittsburgh faces the AFC West division — the Kansas City chiefs, Las Vegas Raiders, Los Angeles Chargers and Denver Broncos. The Chiefs won the AFC in 2020.

As far as interconference play goes, the Steelers will play the NFC North division in 2021. That means games against the Green Bay Packers, Chicago Bears, Minnesota Vikings, and Detroit Lions.

With the NFL expanding the season to 17 games beginning in 2021, the Steelers will also play the Seattle Seahawks, another 2020 playoff team.

What are Clay’s projections based on when it comes to current roster construction of all 32 teams? Its hard to say for sure. But obviously, it’s statistic-based with a lot a subjectiveness likely involved.

Will the Steelers be able to win at least nine games in 2021? It’s hard to imagine them not winning at least that many games as long as there are not a lot of major injuries. Will a record of 9-8 ultimately get the Steelers into the playoffs in 2021? It just might.

Overall, Clay’s post draft projections show why there isn’t likely to be to many major media analysts picking the Steelers to win the Super Bowl in 2021. In fact, I would expect a large majority of them to have the Steelers failing to make the playoffs in 2021 to boot.