Last week I released my first article in my “Quarterback Study Series”.  Here is a link to that post, I would recommend it if you dive deep into this post (for full context of this study): https://steelersdepot.com/2021/05/eckert-qb-stats-study-1-0-using-advanced-epa-cpoe-metrics/

In the first study, we looked at quarterback success in the 2020 regular season based on two stat points: EPA/Play = (expected points added) expected points after play – expected points before, and CPOE= (completion percentage over expectation) probability for a complete pass compared to similar situations.

Today, I wanted to dive into a larger view than a single season.  We will be looking at the last 5 seasons (2016-2020), and I figured that since I got some good feedback on the data points I used in the first study overall, I kept them the same so we could get a larger sample size. As we learn about the players, I would urge you to remember this study was not what the quarterback can do, but what did they do with the attributes that every quarterback requires (ex. not every quarterback is a rushing threat, but everyone is expected to add points for your team to win, and complete passes).  With that in mind, let’s see what 2016-2020 looked like: 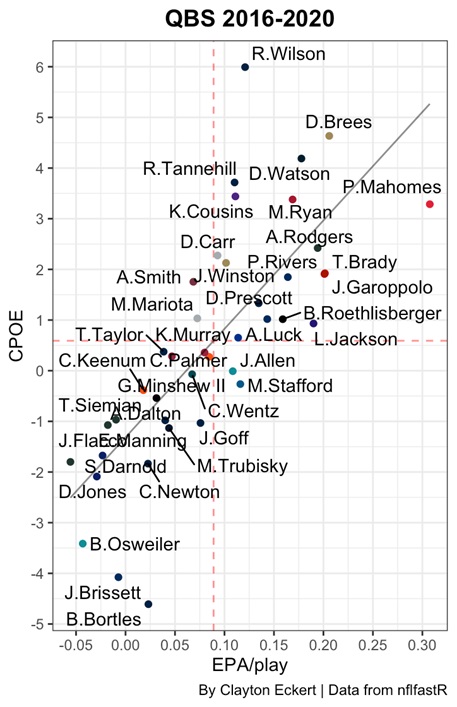 I hope you are excited to see how we can layer this information to get more value out of it, perhaps learn something about how we’ve previously thought about players, and hopefully get an opinion on if we can use this model somehow to predict future success.  For now, let’s rank them by stats similarly to last week, but with the 5 year sample size, and adding some new value: Dropback leaders will give us value from a usage/durability/career longevity standpoint, EPA and CPOE ranks for quality of that usage, and Study 1.0 Rk for recency value.

Lots of cool stuff, but I really like the layers we added here. I really liked how this took away recency bias a bit, while also not reaching too far back in history to make comparisons irrelevant.  Hopefully this provides context into my point from the first study on the Steelers, focusing on quality over quantity in regard to Roethlisberger.  Let’s compare Ben to Ryan Tannehill for example, if the Steelers and Ben commit to the run game/offensive players they have invested in, and a more balanced offense, it could take some of the weight off of Ben compared to last season. He could focus on bringing his pass attempts down and completion percentage up (which I view as plausible, along with the run game and wide receivers cutting their drops down), and they could potentially have similar success to how the Titans run their offense with a more efficient Ben (with less play action most likely *insert sad face).

Now for another fun ending outlook. Without any personal opinion, I am going to rank them based on the information from Study 1 (2020 EPA/CPOE) and Study 2 (2016-2020 EPA/CPOE), then by dropbacks (descending) to keep the usage/durability/career longevity value:

NOTE: Teddy Bridgewater, Justin Herbert, and Jared Goff made the 2020 Study rankings but fell off the list in this study.

Right off the bat I was surprised Drew Brees was the only quarterback to be Top 5 over the last 5 years! I really enjoyed this in regard to viewing players performance first for possible player comps, as opposed to physical/athletic player comps (nothing against those, just another viewpoint).  For example, Matt Ryan and Aaron Rodgers headline the tier 2 quarterbacks, and both have had long careers, but I didn’t think they would be this comparable in terms of my study.  Ryan also had the most dropbacks of any quarterback in the last 5 years.  Obviously, they are different from an athletic, and style of play standpoint, but the results in the key quarterback traits, (scoring points and completing passes) it is a good “quarterback result player comp” over the last 5 seasons in my opinion.

I feel like I could keep going but let me open it up to you! Please share in the comments your favorite parts of the study, favorite “quarterback result player comps”, or things you would like me to study in the future!