With the 2021 NFL Draft now complete, a few individual player stat projections for the regular season have begun to surface. Notably, Mike Clay of ESPN.com has now released his annual post-draft stab at player projections for all 32 teams. With that, it’s time to look at what he has for several members of the Pittsburgh Steelers offense.

As for Steelers rookie running back Najee Harris, Clay has the team’s first round draft pick this year projected to have 223 rushes for 961 yards and seven touchdowns. Additionally, he has Harris down for 51 receptions for 385 yards and two touchdowns. That’s a total of 274 touches for Harris as a rookie for a total of 1,346 yards from scrimmage and a whopping nine touchdowns.

As for the Steelers’ top three wide receivers, Diontae Johnson, JuJu Smith-Schuster and Chase Claypool, Clay has all three with more than 900 yards receiving in 2021 and at least six receiving touchdowns for each. Clay has Johnson leading the Steelers in both receptions (95) and receiving yardage (1,017).

With those primary Steelers offensive players recapped, it feels like Clay might be in the neighborhood with most of them. Obviously one would hope that he’s off on Roethlisberger’s interception prediction for starters. Additionally, one would also hope that Freiermuth’s 2021 rookie season receiving stat line comes in at a little better than what Clay has him down for. 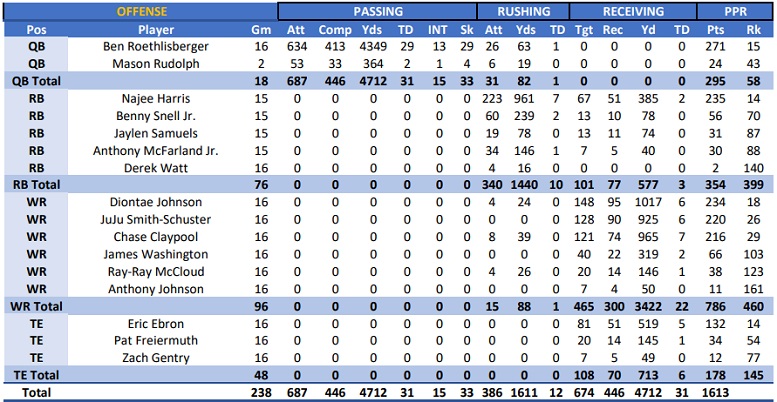 per Mike Clay via espn.com