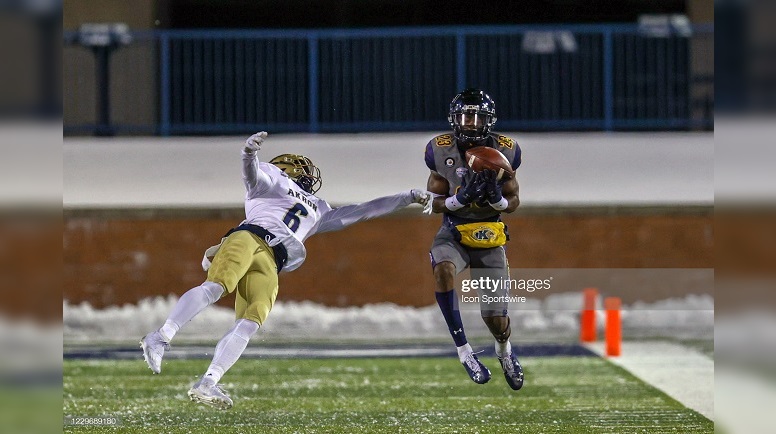 The Pittsburgh Steelers recently agreed to terms with undrafted free agent wide receiver Isaiah McKoy out of Kent State. With the team’s annual rookie minicamp getting underway next weekend, it’s time to contextualize his targets from the 2020 season.

For his 2020 season at Kent State, McKoy is in the books for having caught just 25 total passes for 455 yards and five touchdowns over the course of just four games played. For the purpose of this contextualization post, I watched all four of McKoy’s 2020 games. In them, he registered 38 total targets and I charted them all. That play-by-play data of those 38 total targets can be found below.

In the four games that I watched from last season, McKoy caught 25 of his 38 total targets with four of those incompletions being drops by him. He did register a healthy average intended air-yard distance of 16.7 yards on those 38 total targets. Additionally, his average air yard completion distance was 12.8 yards on his 25 receptions. That’s a very nice number. Additionally, 13 of those 25 receptions came 10 or more yards past the line of scrimmage.

On those 25 receptions in 2020 that McKoy had that I watched and contextualized, he averaged 5.4 yards after the catch. It’s worth also pointing out that while McKoy did have four drops, there were five deep passes that could have and should have been completed had the quarterback been more accurate as the wide receiver was open and had separation down the field. All five of those likely would have resulted in touchdowns, as well.

For a small sample size, McKoy’s target tape is not bad at all. That said, he is not a nuanced route runner just yet. He mostly played on the right side of the offense, as he had very few targets to the left side. Despite not being blazing fast, McKoy can get down the field and off the line of scrimmage well. Against both press and off coverage, there are instances of him getting very good separation. It’s worth noting that only one of McKoy’s receptions came in the middle of the field between the hashmarks. Two of his drops came in the middle of the field.

McKoy’s tape has me feeling like he’s a poor man’s James Washington when he entered the NFL out of Oklahoma State. McKoy did not test well at all at his Pro Day. While he registered a 4.68 time in the 40-yard dash, he plays faster than that. He’s not a blazer, however, and not a twitchy player off the line but he does get open down the field.

Other things that I noticed are that McKoy does have a nice catch radius and there are some contested catches in his college tape reel. He’s not bad after the catch. He also seems to not be fond of catching passes over the middle with a defender lurking. Obviously, the thing that stuck out the most when it comes to McKoy’s 2020 tape was his ability to separate deep and catch passes way past 10 yards down the field. That’s his calling card exiting college.