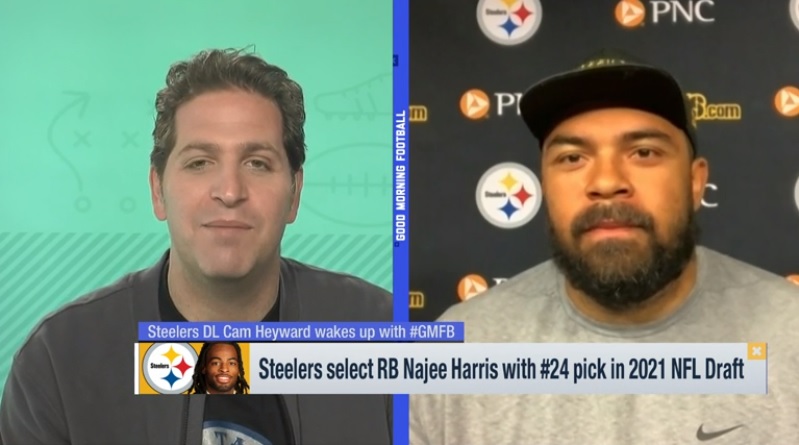 Primarily, the Pittsburgh Steelers drafted Najee Harris 24th overall to help their offense and resuscitate a league-worst run game. But the benefit of selecting him isn’t just for the offensive side of the football. Cam Heyward believes Harris can have a positive impact on the Steelers’ defense, too.

“I think as a defender, we’re most excited to have him,” Heyward said. “Having a guy like that who can tote the rock 30, 40 times a game really puts an ease for the defense. Man, he can do multiple things. I think the investment in our offense this offseason has been huge and it starts with him.”

A more effective and balanced run game will make for a more ball-control offense. One that’s able to sustain drives, convert in short-yardage situations, and simply ask the defense to be on the field less often. That means the defense gets to play more rested and not get worn down, something that was evident down the stretch last season. Later in the interview, Heyward admitted as much.

“I think we lost a lot of gas as we went down that stretch. Our balance between our offense and defense wasn’t great. We weren’t getting off the field as much as we were early in the season and then our offense couldn’t sustain drives.”

The Steelers’ snap counts reflected that. Over their first four games, the defense was on the field for 60.5 snaps. Over their last four, that numbers increased to 64.5. It might not seem like a major difference but the Steelers’ inability to run the ball or close out games impacted both sides of the ball. By year’s end, Pittsburgh looked like one tired team.

Obviously, Harris isn’t going to carry the ball 30-40 times per game. Unfortunately, that seems to be the news story many outlets are running with. It ignores the substance of Heyward’s comments and the point he’s making. A better run game makes life easier on everyone, offense and defense.

Heyward told GMFB he’s already reached out to Harris and is excited to get to work once the Steelers’ OTAs start up next week.

“I got a chance to text him, text back and forth. Just hearing about him here in Pittsburgh. Great kid, loves to get the work.”

Given how much the Steelers are counting on him as a rookie, Harris better be ready to embrace all the work he can handle.