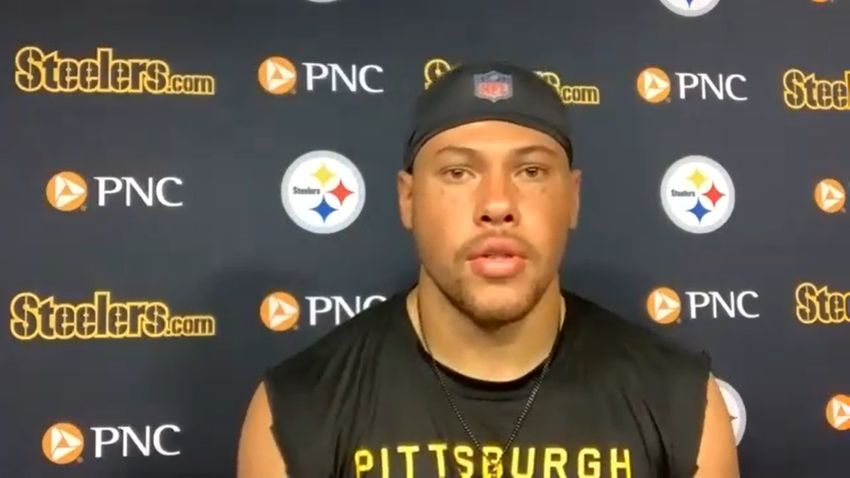 One of the most universally-popular features of offseason sports coverage is the sky-is-falling variety of how this or that team is coming apart because of a prominent player leaving. That player’s absence will inevitably lead to the entire unit sliding back into something not quite adequate.

While sometimes that is true, depending on the significance of the player, it also depends on his replacement. And when the Pittsburgh Steelers were being covered in this way in relation to the free agency departure of edge rusher Bud Dupree, second-year Alex Highsmith admits he couldn’t help but notice.

“I did see some reports that really just gave me more motivation to just be the best that I can be and just continue to work harder”, he told reporters earlier today following OTA practice. “I think it shows that they do have faith in me to be able to come in and to earn this role. I would really just say it gave me more motivation just to work even harder when I did see those reports coming out”.

Dupree was a first-round draft pick of the Steelers in 2015, and has been one of their starting outside linebackers for the better part of the past six seasons. He took his game to another level beginning in 2019 and helped create arguably the best pass-rush duo in the NFL with T.J. Watt, recording 19.5 of his 39.5 career sacks over 27 games during that span.

But while it came during a slide for the Steelers in terms of the win-loss record, Highsmith had the opportunity to get on the field at the end of last season for the final five games after Dupree tore his ACL, and the general consensus has been that he showed that he has the ability to play in this league.

A third-round pick in 2020 out of small-school Charlotte, Highsmith would instantly win the coaches’ favor as the third outside linebacker — though admittedly there weren’t many other options — and earned playing time with rotational work. The Steelers even inserted a three-outside linebacker package in part to get him on the field a bit more.

He finished his rookie season with only two sacks, though he also registered six hits. He put together 48 tackles as well, including five for loss, and had an interception earlier on in the season against the Baltimore Ravens.

The Steelers believe that Highsmith will be able to step into the starting lineup on a full-time basis this year, which is why they did not feel pressured to significantly address the position this offseason. While they re-signed veteran journeyman Cassius Marsh, they also allowed reserve Ola Adeniyi to leave in free agency along with Dupree.

They did add another pass rusher in the draft, waiting until the sixth round before landing Quincy Roche, whom many draft analysts believe has the potential to be a late-round steal. But suffice it to say that if they were really worried about Highsmith’s ability to take over the role, they would have done something a bit more than this.