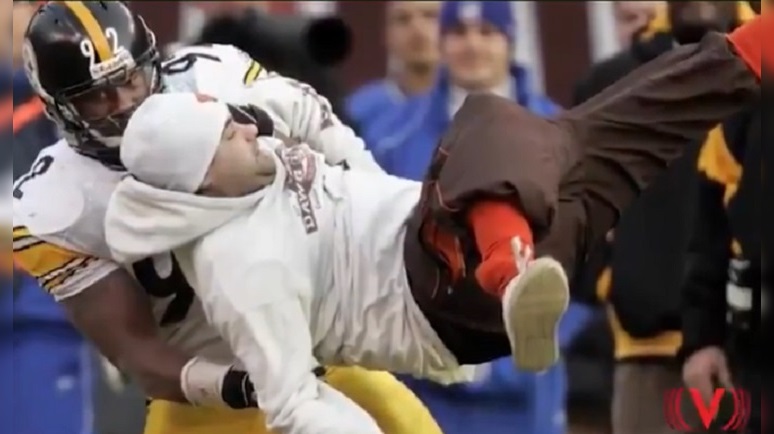 Former Pittsburgh Steelers guard Alan Faneca, who will be formally inducted into the Pro Football Hall of Fame as a member of the 2021 class later this summer, was on the Soup with Coop podcast recently. During his interview, he talked about the time in 2005 that outside linebacker James Harrison slammed a Browns fan on the field.

“He’s one of the best,” Faneca told show host Cooper Manning of Harrison. “You know, everybody loves to talk about James and his strength; one of the best sequences of it that I’ve ever seen was when we were in Cleveland and one of these guys runs down on the field and he’s running laps around the field and avoiding the police and security, and he comes just close enough to the sideline and James takes two quick steps out and grabs him by his waist and his shirt and literally picks him up and body slams him all in like one smooth motion. And my man was, you know, he was evading the police, but he really shouldn’t have been. He was definitely north of 230 [pounds] in a 5-foot-8 frame, and [James] just, I mean he just snatched him and threw him to the ground like it was no effort, like he was just picking up a five-pound thing of potatoes at Whole Foods.”

That incident with Harrison slamming a Browns fan down on the field happened on Christmas Eve in 2005, a game in which the Steelers won in Cleveland, 41-0.

The name of the Browns fan that Harrison slammed to the ground was Nathan Mallett. Reports at the time indicated that he was quite intoxicated when he decided to run out on the field. In an interview that followed that incident, Mallett told Cleveland’s 19 Action News that he was embarrassed by the moment and that he had since apologized to the Browns in addition to advising others to not duplicate his tomfoolery.

Mallet also said in a statement, “There’s nothing I can say except I hate losing to the Steelers.”

Harrison later confirmed that he slammed Mallett down to the ground because he was running in the direction of the Steelers’ sideline.

“We didn’t know if he had anything on him or if he might do something,” Harrison said. “I was protecting my teammates. I didn’t want to hurt him. I just wanted to keep him down until the proper authorities came.”

Harrison will obviously be best remembered for his 100-yard interception return for a touchdown to close out the first half of Super Bowl XLIII against the Arizona Cardinals. Beyond that, however, it’s hard to not think about Harrison and not instantly remember him slamming that Browns fan to the ground in 2005.