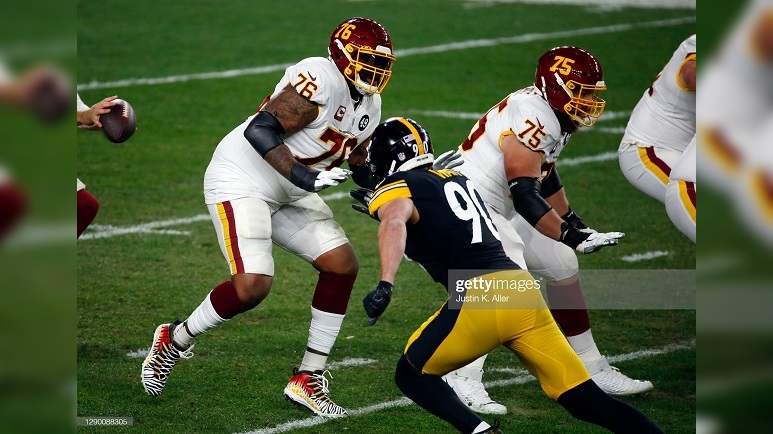 The Washington Football Team released veteran tackle Morgan Moses on Thursday. Since then, I have received a few questions on Twitter and via email asking me if the Pittsburgh Steelers have a chance at signing him. For starters, the broad answer to that question is yes, just as it is with every free agent. Within that, however, lies the more serious question of how bad do the Steelers want any free agent, and what are they willing to pay to sign said player?

When it comes to Moses, who was scheduled to earn a base salary of $7.5 million in 2021 prior to him having his contract terminated, it’s easy to surmise that he will be looking to get at least $5 million in cash from a team in 2021 as part of a one or two-year deal. After all, Washington just reportedly gave tackle Charles Leno a one-year deal worth up to $5 million and Moses, in my opinion, is on his level. Also keep in mind that the Baltimore Ravens just recently paid former Steelers tackle Alejandro Villanueva $8 million for one season, even though technically he signed a two-year, $14 million contract.

As I pointed out in my recent Steelers salary cap update, the team really doesn’t have much in the way of space to play with moving forward. To appease the masses reading this post, however, let’s assume the Steelers could get Moses to sign a two-year contract that included the veteran tackle getting $5 million in total for 2021. If such a deal could be struck with Moses, the lowest his 2021 salary cap charge could be is $3.375 million.

Moses would probably want that 2022 year to void as well so he could test free agency one last time next March. Obviously, the Steelers could do four voidable years instead of just one, but in doing so it would only lighten the 2021 cap charge by $1.1775 million, leaving Moses with a charge of $1.86 million. The downside to such a deal is that it would leave the Steelers with a dead money charge of $3.14 million in 2022.

In the deal that I just laid out, that would essentially pay Moses $5 million for 2021, it would still be hard for the Steelers to afford him unless maybe a termination were to happen. So, who would be the likeliest termination candidate so that the team could afford Moses? Well, probably tackle Chukwuma Okorafor, scheduled to earn $2.183 million in 2021. Cutting Okorafor would free up enough cap space for the Steelers to afford Moses on a deal that would pay him right at $5 million for 2021 with the length of the contract being two years or more.

Is Moses an upgrade over Okorafor? I would say certainly he would be, but it is worth noting that Moses has predominantly been a right tackle for most of his NFL career. He did, however, play left tackle almost exclusively during his final season at Virginia. So, could he play left tackle for the Steelers in 2021? I suppose so if that’s what they deemed the best for him.

Now that I have mapped out a path for Moses to sign with the Steelers in the coming week or weeks to appease most of you, I just can’t see such a transaction ultimately happening. That’s mainly because I think he’ll get a much better deal from another team. Personally, I could see the Indianapolis Colts making a run at Moses for around $6 million total in 2021, and then letting him start at right tackle for them. That seems like the perfect landing spot for him. The Kansas City Chiefs would also be a great landing spot for Moses for the 2021 season.