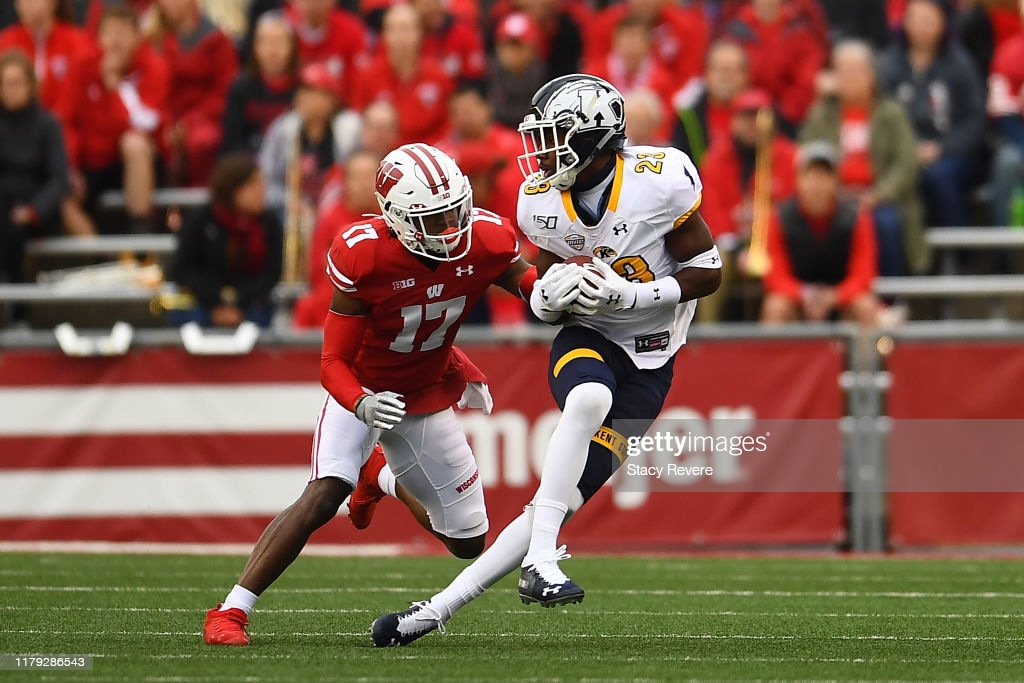 For context here are average numbers for receivers from the 2018 NFL Combine with McKoy’s listed below.

As you can see whilst he compares well in terms of height, weight, hand size, his testing numbers are all slightly below average.

The first tape I watched was Kent State vs Wisconsin from 2020.

The first clip is from McKoy’s first target. He runs a curl route against off coverage and uses his big wingspan to make the catch away from his body.  McKoy does a nice job getting in and out of his break to get separation from the DB.

This next clip taken from the Wisconsin game shows McKoy’s lack of hustle. Often when not the featured target McKoy becomes a spectator and does not show effort to make a block to try and spring the runner. This is a common theme in his tape and leads me to believe he may struggle on special teams.

The next clip is taken from the Auburn game in 2019. McKoy had a steady day with 4 catches for 85 yards, including this 53 yard touchdown shown below. McKoy is a long strider that gets into his running and often ghosts by defenders. Although he tested poorly there are plenty of examples where he runs by defenders. McKoy releases up the seam and the safety is matched up 1v1 against him. McKoy doesn’t do anything fancy, he just runs by him for the long score.

The second clip from the Auburn game again highlights his lack of willingness to get involved once the play breaks down. The Golden Flashes run a very uptempo no huddle offense and it did make me question whether the receivers were told to make sure they were in position for the next snap. I would have still liked to see him help out his teammate here.

The next game I watched was the 2019 game against Buffalo. This was one of his best games. There were times where McKoy took over this game and was a nightmare for the Bulls defense. This first play comes from the second Quarter. McKoy is aligned at the top of the screen in single coverage on Buffalo Cornerback Roy Baker. McKoy releases off the line and eats into Baker’s cushion. Once Baker turns outside, McKoy cleverly moves back to the inside and gains leverage on the defender on an inside go route or even a skinny post. At this point it becomes a foot race and McKoy outlasts Baker and hauls in the touchdown pass.

In this next clip from the Buffalo game we see another example of McKoy’s deficiencies as a blocker. Kent State ran a Jet Sweep to his side and he is responsible for blocking the first defender inside him to allow the ball carrier to get to the sideline. McKoy is poor here  he is then forced to redirect to try and block the corner. It’s too late at this point and the ball carrier is brought down for a minimal game.

The next clip also from the Buffalo game shows McKoy against press coverage. The Bulls have now aligned Logic Hudgens on McKoy but the result is the same. McKoy is aligned tight to the sideline and running a fade route as part of a four verticals concept by the Kent State offense. McKoy releases outside and stacks the defender. This gives a window for the ball to be thrown into before the safety can come over the top. The ball is slightly underthrown by McKoy does a good job of securing the catch for the big gain.

On this play from the 4th Quarter we see an example of McKoy’s problem with drops. McKoy runs a nice inbreaking route off a run fake. McKoy looks up just as the ball arrives appearing to ‘hear footsteps’ which causes him to lose concentration and drop the ball. McKoy had a number of drops throughout his career often in situations similar to this.

On this next play from the Buffalo game McKoy shows how he is able to draw penalties from opposing defensive backs. His speed and big frame make it hard for opposing corners and force them into bad positions which often result in penalties. McKoy again runs a fade route and releases outside. Once he gets past Baker, McKoy stacks him meaning that if the ball is underthrown the defender has to come back through McKoy to play the ball. On this play a flag was thrown for defensive pass interference however McKoy managed to make a nice adjustment and come up with the reception.

McKoy is a traditional Z receiver. He is tall, has a big wingspan and although doesn’t have top end speed he excels at getting down the field and making plays on the ball.

McKoy has a tough job trying to compete for a spot on the active roster in what is possibly the Steelers best and deepest position. McKoy would need to make a big impact on special teams, like Darrius Heyward-Bey did later in his career in order to make the active roster. McKoy may be a candidate for the practice squad.