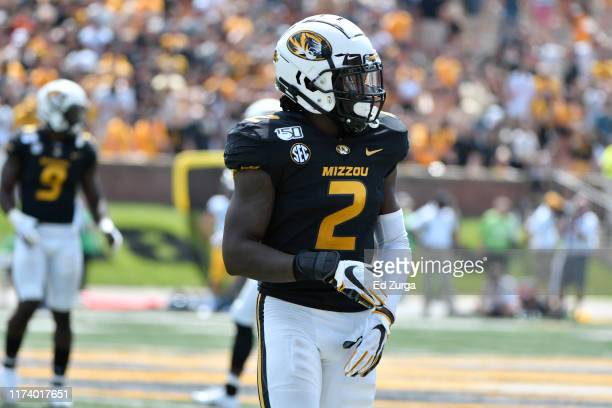 For the final report, we’re looking at Missouri DB DeMarkus Acy. Technically not a UDFA, he was part of the 2020 class, but was signed after the draft with the rest of the eight undrafted players.

DeMarkus Acy was a player in the 2020 draft who spent time on some NFL practice squads last year.  The Steelers signed him as a free agent to compete with the numerous defensive backs added during and after the draft this year.  He was a three year starter at corner, playing on the field and boundary sides, and was a safety in high school.

Against the pass, Acy was used in various coverages including Press, Off Man and Zone.  In Man coverage, he shows solid patience at the line in Press coverage to match receivers. In Off Man coverage he shows a smooth back pedal and has solid use of hands to match physically with receivers and solid speed to hang on deep routes.  In Zone coverage, he looks comfortable playing with his eyes on the QB and shows solid acceleration to contest on throws in front of him. He is solid getting his hands into throwing lanes and has solid physicality in contested catch situations.

At Tennessee, Acy (2) is at the top of the bunch at the bottom of the screen. As the QB scrambles, Acy does a nice job to come back toward the LOS to break up the pass.

At Tennessee, at the top of the screen he will drop into Zone coverage and reads the QB to break on the deeper route and make the interception.

At Kentucky, he is at the bottom of the screen and will open his hips and run with the WR on the go route and is able to get a hand on the ball to knock it away.

At Georgia, he is over the slot receiver and hangs with him on the curl route in the middle of the field and gets his hand around to break up the ball.

Against the run, he has solid recognition of runs that come in his direction on the outside, with solid acceleration and will attempt to cut runners with no blockers in front of him.

Vs West Virginia, this was the best effort I saw on a running play.  He is at the top and reads the play, comes to the ball and is able to get in on the tackle.

In press coverage, there is marginal bend in his knees bending more at the waist, lunges with his jam getting his feet out of position and when he doesn’t jam he gets on his heels.  In off coverage, he opens his hips too soon putting him in recovery mode quickly. He had adequate explosiveness in jump ball situations. He has adequate recognition of route combinations, is tight in the hips and lacks lateral quickness and change of direction. He is adequate locating the ball on deep throws. Against the run, he has poor effort to get involved and really only gets involved if he has too. I saw him veer away from opportunities to get involved in tackles. When he does tackle there is poor physicality and lacks pop in his pads. He shows marginal pursuit of the ball anywhere around the field.

At Tennessee, he’s at the top of the screen. He recovers nicely after opening his hips in the wrong direction but can’t find the ball and gives up a big play.

Vs West Virginia, at the bottom of the screen he will lunge and miss with his jam before beginning to drop into Zone coverage. He reads the pass to the running back and avoids the blockers but his only effort is to swipe at the ball rather than try to make a tackle.

At Georgia, the QB is going to scramble up the middle and Acy looks to have an angle to get to him but kind of pulls back twice before finally getting in the pile.

Overall, Acy has good size and collegiate experience as an outside corner.  He has played Man and Zone schemes and is patient in Press and solid closing on the ball in Zone.  He is competitive in jump ball situations and has solid ball skills. Areas to improve include balance and jam in Press, timing when opening  his hips and effort in the run game.

Acy looks most comfortable as an outside corner in a Zone scheme where he can play with his eyes on the QB and make plays coming downhill.  The Steelers have moved more toward a Man coverage scheme and prefer their DB’s make some effort in the run game. To make the team he would also need to play special teams and he lacks the aggressiveness as a tackler to be used there.  With the plethora of defensive backs brought in to compete I think he’ll have a hard time making the team without changes to his play style.