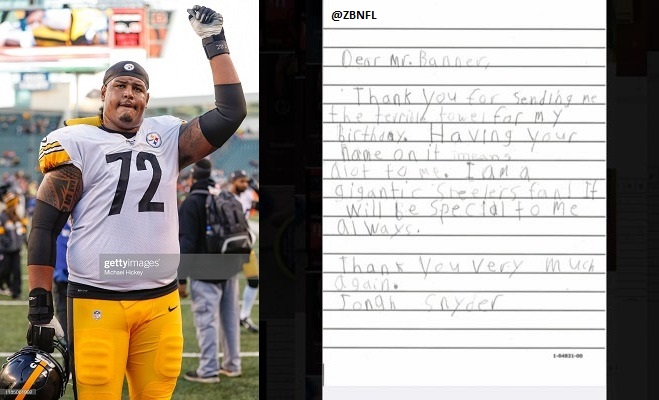 Do you still remember the first time that you had personal contact with a member of the Pittsburgh Steelers? I sure do, and I bet young Steelers fan Jonah Snyder always will, as well.

Snyder apparently celebrated a birthday recently. One of his gifts was a Terrible Towel that was sent to him from Steelers tackle Zach Banner. That gift prompted Snyder to send Banner a handwritten thank you letter, and the Steelers tackle posted it on Twitter on Thursday along with a little sentiment that stated: “Some things are bigger than football…”

“This made my day today!”

#NewProfilePic
Some things are bigger than football…

This made my day today! pic.twitter.com/Znyzf6LVCW

How cute is that? Additionally, imagine how special Snyder will feel when he sees that tweet from Banner and the multiple stories that are bound to written about it. Banner, by the way, has since made the picture of the letter his Twitter avatar.

Brian Batko of the Pittsburgh Post-Gazette interviewed Banner on April 12. Since it was 412 day, which is the Pittsburgh area code, he asked the Steelers tackle how often do fans or just random people stop him on the street and try to talk to him, or ask for a picture or an autograph.

“It’s a blessing, man. I always make sure I do,” Banner answered. “It was a little hard during COVID, and I had to be smart about it, but I’m always the kind of guy moving forward and I’ve always been my entire life, if a kid wants a picture or wants something signed, you do it. It’s an honor, because the way that they idolize us Steelers and things like that, I was once a kid growing up. I had admiration of local SuperSonics, local Mariners, Ken Griffey Jr., all these type of guys growing up. I understand that opportunity. It’s very humbling. I feel honored to be in that position, and I love this city, man. The vibes and everything in this city circulate around the Steelers. Through good, through bad, there’s always love, and I appreciate that.”

Banner certainly gets it when it comes to being a professional athlete, one who plays for the Steelers, at that. You can’t help but root for him. Especially on the heels of him missing nearly all of the 2020 season to a torn ACL suffered in Week 1 against the New York Giants.

Banner, who signed a new two-year contract with the Steelers several weeks ago, seems to be on schedule to resume practicing at some point during the offseason, and by the start of training camp at the latest.

The first time I had personal contact with a Steelers player was after the team played a 1980 preseason game against the Atlanta Falcons at Atlanta Fulton County Stadium on Friday, August 15, 1980. I was 12 and-a-half at the time. The Steelers won that game 17-14 and it was even televised live by the Monday Night Football crew: Howard Cosell, Frank Gifford and Fran Tarkenton. After the game, I was fortunate enough to meet several Steelers players and get their autographs. One of them was Hall of Fame wide receiver Lynn Swann. Another one of those players was Craig Wolfley, who was a rookie at the time.

Good for young Jonah and good for Banner. This is what it’s all about.