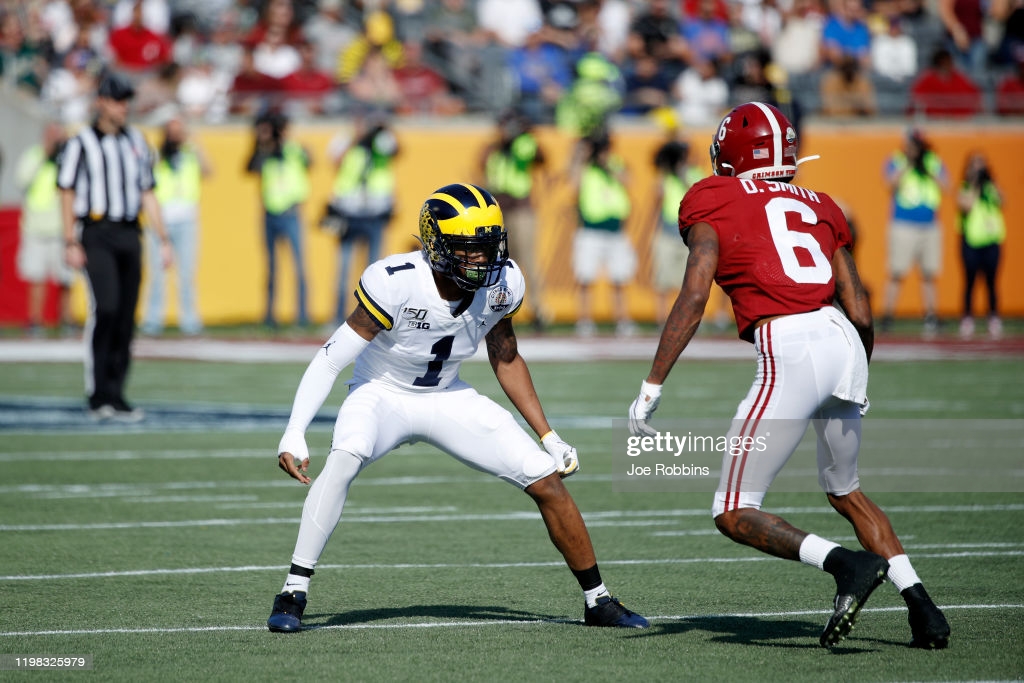 With the NFL Draft approaching, I thought it was a great time to do my final mock draft.

I was very happy with this mock draft, and I would like to see something similar on draft day. I think I managed to plug the team’s main needs with some really talented players. Let me know what you think!

Analysis: In my opinion, Harris is the best back in this draft. He had a stellar year with the Crimson Tide that culminated in the National Championship back in January. Draft analyst Tony Pauline recently claimed the Steelers have a shortlist of three for the 24th pick. That list was Alabama Center Landon Dickerson, Oklahoma State Tackle Teven Jenkins and Harris. Should Harris be there at 24, I definitely think he’s the pick.

Harris fills a big need for the Steelers, who have not had a true feature back since Le’Veon Bell. Harris is the prototypical size you want from a bell cow running back, and is also a very versatile player. He is great out of the backfield and really showed off his route running ability at his Pro Day.

Harris is the next man up in a long line of productive Alabama RBs that includes Mark Ingram, Derrick Henry and Josh Jacobs. He shares similar traits to those runners, all of whom run with power between the tackles. Although he may not have the long speed of the other backs in the draft, he has more than enough to be successful.

Harris spoke publicly about his interview with the Steelers and said it was a cool experience for him. He also mentioned that the whole staff was on that call, including Mike Tomlin, Kevin Colbert and the defensive staff. That alone speaks volumes to how the Steelers view Harris.

Steelers Depot’s Alex Kozora did a profile for Harris should you want to check out more about his game.

Analysis: This pick was a no brainer for me. The Steelers’ biggest need is at center following the retirement of Maurkice Pouncey. Humphrey is an athletic freak. He scored a perfect 10 in RAS (relative athletic score), the highest among all players in this draft class.

Humphrey was also very productive at Oklahoma. He was named the Big 12’s Offensive Lineman of the Year for both 2019 and 2020, and is one of the best interior offensive linemen in this draft.

Humphrey is probably a first round talent, and there was some buzz last month of him being taken in the first. However, centers tend to slip down the board. I wouldn’t be surprised if he is gone when the Steelers pick at 55. If he’s still on the board, I think the Steelers would run to the podium to select their next center.

Analysis: The first thing to note about Thomas is that he opted out of the 2020 season, which almost certainly will have harmed his stock. Thomas only started 13 games for the Wolverines, but was productive in that time. He had four interceptions and five career fumble recoveries, and he was also a threat as a returner.

Thomas is a versatile corner that is very good in press coverage despite his size. Following the departures of Mike Hilton and Steven Nelson, the Steelers need to add talent at corner. I believe that Thomas has the ability to play in the slot. However, I would expect him to focus on playing outside as a rookie, with Cam Sutton sliding into the nickel role in sub package situations.

For a more detailed look into Thomas, check out this profile written by Josh Carney.

Analysis: Brown is another freak athlete that tested well. Alongside the aforementioned Creed Humphrey, he scored a perfect 10 RAS score. Brown is a monster with a very similar build to outgoing left tackle Alejandro Villanueva, at 6’8″, 315 pounds. Brown spent most of his time at right tackle whilst at UNI, and as a fourth-rounder should get some time to work on his craft. I do think he’s a feasible option at left tackle in the future.

One negative is that he played at a small school, and therefore didn’t get the ability to play against top-level talent. Brown attended the Senior Bowl and had mixed results.

The Steelers have little to offer at edge behind Watt and Highsmith and I did consider some of these options here. Brown was too good of a prospect to pass on.

Check out the draft profile for more information written by Jonathan Heitritter.

Analysis: The Steelers have a huge lack of depth at the tight end position. Following years of underinvestment in the draft and the retirement of Vance McDonald, the Steelers’ TE room is looking sparse ahead of 2021. Zach Gentry has offered little since he arrived in Pittsburgh, and Kevin Rader is probably just a special-teamer at this point.

Tremble is a fantastic blocker that has drawn comparisons to George Kittle. Admittedly, he is not as athletic as Kittle, and is certainly less of a receiving threat. Tremble, though, is very young (he doesn’t till 21 until the summer), which gives him time to develop in his role.

The Steelers could really use a player like Tremble to replace McDonald. Maybe after a couple of years, Tremble could evolve into the next Heath Miller.

Analysis: As mentioned earlier in the article, the Steelers also lack depth at the outside linebacker position after losing both Bud Dupree and Ola Adeniyi to the Titans in the offseason. Alex Highsmith played the role of the third OLB in 2020, and after the Dupree injury developed into someone the Steelers should be able to rely upon next season.

Jackson was a part of a Chanticleers team that turned many heads in 2020. Jackson is a well-built edge defender with strong hands and a great work ethic. He was named 2020 Sun Belt Conference Defensive Player of the Year, and had 8.5 sacks last season.

Jackson has his limitations — he has limited bend and shows some stiffness in his hips. He would however be a solid rotational player for the Steelers in 2021.

Analysis: Forrest Jr. is a rangy defensive back with the ability to play both man and zone coverage. Forrest tested strongly at his Pro Day with a 4.42 forty and a 39″ vertical leap.

The Steelers have some questionable depth at safety behind Fitzpatrick and Edmunds, with Cameron Sutton probably the next man up. Forrest Jr. is a player that can provide some depth to the Steelers’ secondary, as well as make contributions on special teams.

Kelvin Bryant did a great job profiling the Cincinnati defender.

Analysis: The final pick I looked to provide some depth at nose tackle. The Steelers were able to re-sign Tyson Alualu in large part due a positive COVID test. Although he played great last season, he is certainly not the future at nose tackle.

Bohanna is primarily a space-eating run defender with the ability to hold the point in the middle of the defense. He does not have great athleticism and this will limit his pass rush ability. However, he will be stout up front. The importance of this can’t be overstated when defending against Cleveland and Baltimore twice a year.

‘Big Bo’ played four seasons at Kentucky and also has some NFL bloodlines. His Uncle, Brian Ingram, played for both the Patriots and Chargers.