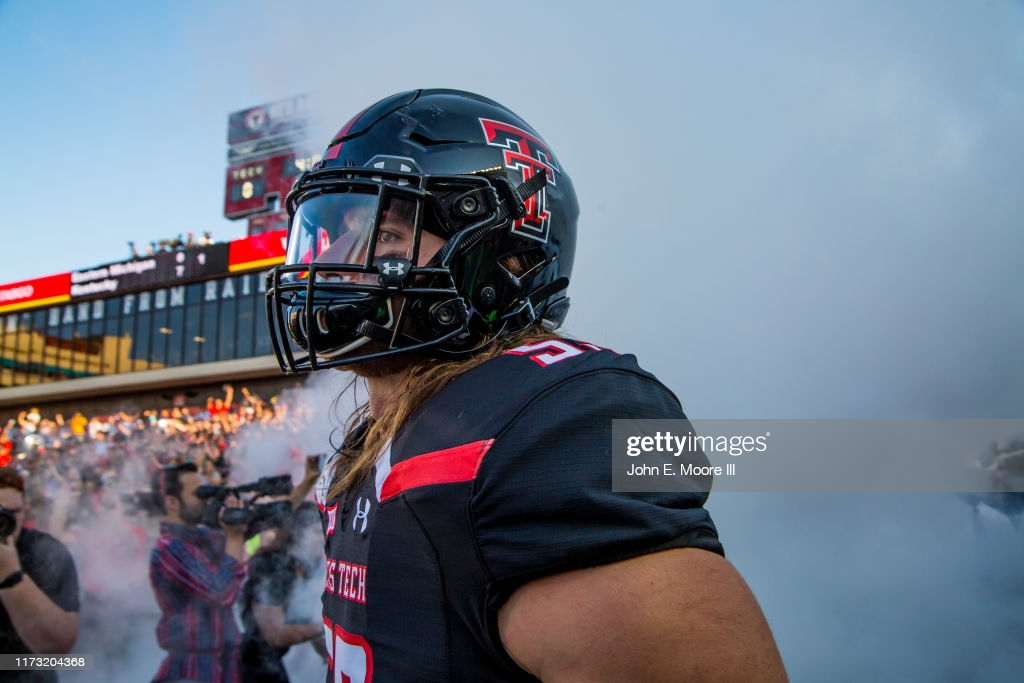 It’s been six years, injury, and one transfer. For a guy like Texas Tech defensive linemen Eli Howard, it’d be easy to have a cynical outlook on life. But he might be the most positive and likable person entering the 2021 NFL Draft. And a pretty good player, too.

Through all of it, Howard is as close to the NFL as he’s ever been. He impressed at Texas Tech’s Pro Day last week. He knows it’s been a journey just getting to that point.

“There’s been a lot of ups and downs,” Howard said in his Pro Day press conference. “I think that’s something that has really shaped my career and shaped the reason why I’ve been here. College football alone is very humbling because you meet some real dudes. You go against some real dudes. You can’t think about your losses too much because the other guy’s getting paid for his college, too. He’s a legit dude. But it’s just been a blessing just to have this day, to have this opportunity.”

Howard wasn’t sure if he’d have the chance to work out for NFL scouts. He suffered a knee injury in October this past season and missed the rest of the year. Howard relented and underwent surgery in late November. But he rehabbed and was able to work out at his Pro Day.

Beyond this year’s injury, getting to that point was tough enough. A two-star prospect from San Angelo, Texas, Howard committed to North Texas out of high school. But he spent only a year there and opted to transfer to Texas Tech, choosing the tougher but potentially more rewarding path. There was no scholarship — Howard was a walk-on, and he had to sit out the 2016 season. His motivation for the move was to get to the NFL, something his mother reminded him of when the road got tough.

“Towards the end of the high school, once you make that decision in your mind, like I want to go to the league. In fact, that was the big reason why I came to Tech, to increase my chances to go to the NFL. I remember whenever I’d already put my name in the transfer portal. I already told Tech I’m coming. I pretty much already signed my name on the dotted line.

“And I told my mom, ‘You know, mom, I’m kind of having second thoughts a little bit.’ And she goes, ‘Listen man, if you want to go to the league and you can’t even start at Tech, what makes you think you’re going to go to the NFL?’ That was the slap in the face that I needed. I was just like, ‘No, you’re right. I need to make this jump and I need to make this leap of faith.’ And it completely panned out for me. It was the best decision I’ve made in my life coming to Texas Tech.”

In his four years with the Red Raiders, Howard compiled 98 tackles (20 TFL) with 14.5 sacks and a pair of forced fumbles. The numbers go deeper than that. Despite just 2.5 sacks in 2018, he led the entire Big 12 with 38 pressures.

Eli Howard is the leading returner in the Big 12 when it comes to pressuring opposing quarterbacks off the edge. pic.twitter.com/LnN3It2jq4

He converted more of those pressures into sacks his junior year, finishing with a career high of five. Howard appeared as a second team All-Big 12 selection.

Howard also excelled off the field as much as he did on it. For three straight years, 2018-2020, Howard was on the conference’s First-Team All-Academic list. At Texas Tech, he earned his bachelor’s and master’s degrees, the latter in financial planning.

Finances and non-X’s and O’s were the focus of this year’s NFLPA Bowl.  The union, virtually, kept the off-field material despite the cancelation of the game because of the pandemic. Some players’ eyes would glaze over at that kind of information. Not Howard.

“It was a wonderful experience. The NFLPA did a great job of putting it on even with all the COVID and everything going on. The biggest thing I gained out of it was we were able to get on a Zoom call with Bruce Smith and Cam Jordan. That was just unreal. I think they talked to us like for an hour and a half, 30 minutes over the time they were supposed to talk to us. So they were really invested in it.

“And I wrote down like four or five pages of notes. Everything from your mindset going in, how you’re supposed to approach it. A lot of the old guys may not be giving you a lot of tips because you’re coming for their job. It was just an incredible experience just to be able to talk to truly incredible Hall of Famers. It was a great experience overall. I’m very thankful the NFLPA selected me to that.”

Back on the field, Howard’s versatility gives him a leg up. He’s played up and down the defensive line and says teams have been looking at him as a defensive end or outside linebacker. At 280 pounds, he could add or drop weight to fit the system of the team drafting him.

Howard could have returned to school for one more season, an enticing option given his knee injury. But after six years in college, Howard knew it was time to make the jump he’s always dreamed about.

Because of his age and the injuries, in a best-case scenario, Howard will be a Day 3 pick. There’s a chance he goes undrafted. But he’s one of the draft’s best-kept secrets and wherever he goes, he’ll have a strong support system beside him.

“My family’s always tried to look with a positive mindset. This is the biggest thing for me though. And it’s something I really try to live by. Life has its ups and downs and you really got to stay steady and look on the bright side of everything. I’m a man of faith. So I believe, if I’m going through tribulations or something, I believe God’s just trying to show me a lesson and show me, a different perspective on things. I think more than anything, you just gotta look at it with the glass half-full. You are what you think you are. Whether you can or you can’t, you’re right. I’m all about mindset and being positive no matter what.”