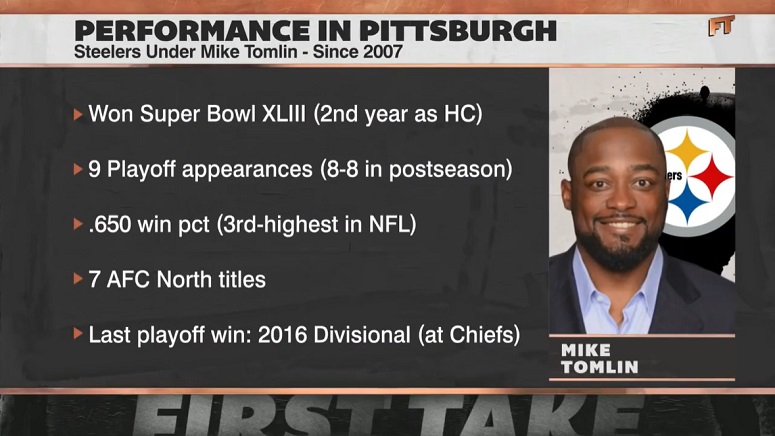 The Pittsburgh Steelers recently signed head coach Mike Tomlin to a three-year extension. While the debate will continue as to whether or not he deserved it, Stephan A. Smith of ESPN believes it was well-deserved. On top of that, Smith doesn’t see Tomlin as being under any more pressure than he already is after signing his contract extension. That extension should keep him in Pittsburgh through at least the 2024 season.

“Well, I don’t think there’s that much pressure on him,” Smith said Thursday on ESPN’s First Take. “I mean, obviously there’s always some degree of pressure because you are representing Steeler Nation. I would remind everybody, however, that in 14 years as the head coach of the Pittsburgh Steelers, Mike Tomlin has never had a losing season. Not one time, not one time. Okay, so we have to take that into consideration as well.”

Smith went on to say that when you look around the rest of the NFL and see some of the head coaches that have come and gone in the recent years, the Steelers extending Tomlin was essentially an easy decision to make, and the correct one.

“So, when I look at it from that perspective, I don’t want to hear about Mike Tomlin, you know, being under pressure any more than, you know what he’s normally under,” Smith said. “You need to win when you’re in Pittsburgh. You need to be a respectable team. I think he needs to get a running game. I think continuing to improve that secondary definitely, or getting somebody to rush the passer, all of those things are important. There are elements that he can address, but in the end, there is no question, the record speaks for itself, 145-78-1, that’s winning 65% of your games. This man does that.”

Smith went on to once again highlight the fact that Tomlin has never had a losing season in the NFL as a head coach as one of the few reasons why he was deserving of his most recent contract extension.

“He has never had a losing record in 14 years,” Smith said. “He is very, very well-deserving of his job. And in a day and age, a time where we’re looking at minorities and lamenting the state of affairs that exist as it pertains to the hiring of minority coaches in the National Football League, I’ll be damned if anybody could sit here and tell me that this dude, who happens to be a minority, an African American, deserves to lose his job anytime in the foreseeable future,” Smith said. “Not with that resume. As far as I’m concerned, he’s one of the standards. Congratulations and props to him. He deserves the damn extension as far as I’m concerned and I’m very, very happy for him and I’m proud of him.”

Tomlin’s 145 career regular-season wins sit 21st overall in NFL history. Currently, it’s the third-most among active NFL head coaches. Tomlin joined the late Marty Schottenheimer this past season as the only two head coaches in NFL history to have 14 consecutive non-losing seasons to begin their NFL careers. He is also the winningest minority head coach in NFL history.

Like it or not, Tomlin is going to remain the Steelers head coach for the next several years. After all, he’s still just 49 years old. On the surface, he still very much enjoys coaching in the NFL and might just continue do so for a very, very, long time. With one more Super Bowl win, Tomlin might find himself a near lock to be inducted into the Pro Football Hall of Fame after he’s done coaching.