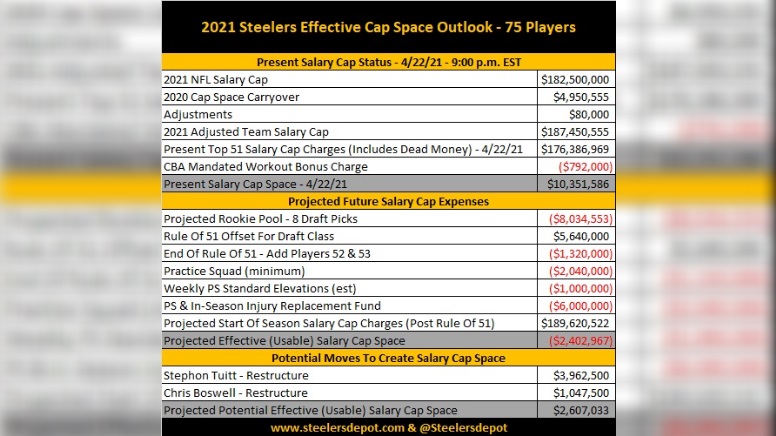 The Pittsburgh Steelers have made several more signings the last few weeks. With it now being less than a week away from the 2021 NFL Draft, it’s a perfect time to update where the team sits from a salary cap perspective.

Let’s start first with what the NFLPA shows on Saturday morning for the Steelers. They now have the Steelers with 75 players under contract for the 2021 season, and the team $10,351,586 under the cap. Those numbers are thankfully now right on the money and up to date, with all contracts processed. That NFLPA number also now does include the 2021 offseason workout placeholder amount of $792,000, which I have been telling you would be hitting the cap at some point ahead of the draft.

It’s worth noting at this point that the Steelers recently received an $80,000 cap credit. It turns out that was for an old injury grievance that finally got settled, according to a source. That $80,000 should cover the total amount of signing bonus money the Steelers will give to their undrafted free agents this year.

As the chart shows below, the Steelers $10,351,586 in cap space that they currently have as of Saturday morning is already all spoken for, and then some. In fact, you can essentially say that the Steelers are $2.4 million over the cap right now, based on predicted forthcoming costs the team will have between now and the start of the 2021 regular season.

The Steelers will likely restructure the contracts of defensive end Stephon Tuitt and kicker Chris Boswell at some point between now and the start of the 2021 regular season. Those two moves will free up a little more than $5 million when and if they happen. The team is also expected to sign outside linebacker T.J. Watt to an extension at some point during the summer. Such a transaction could potentially free up a little bit more of 2021 salary cap space, depending on the structure and new money amounts of the deal. 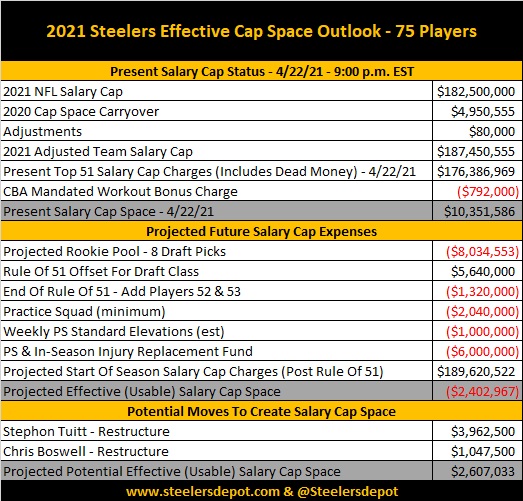