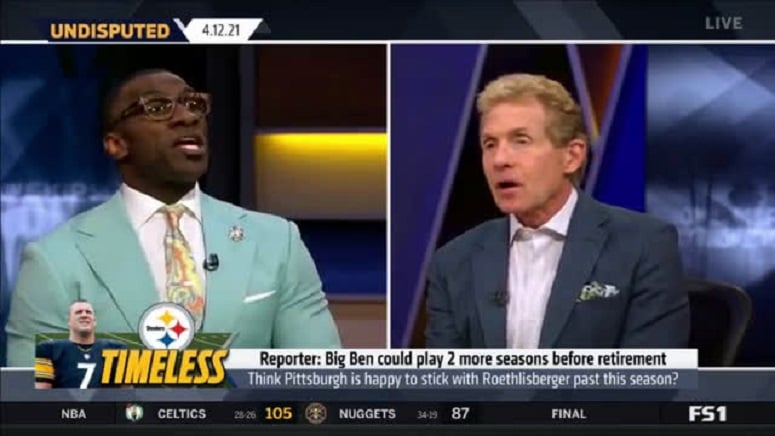 Longtime NFL insider John Clayton said last week on 93.7 The Fan that he thinks Ben Roethlisberger might actually play two more seasons even though his contract is set to void after the 2021 season. Clayton’s statement and assessment don’t seem to sit well globally with other media types, both locally and nationally. Skip Bayless of Undisputed on FS1, however, does buy it.

“If I’m Pittsburgh, I’m trusting him and I would root for him to play three more years because I believe if he rededicated, he’s capable of playing three more years,” Bayless said. “Because you know what? He knows how to play that position. He has instincts that are right up there with [Tom] Brady’s except he’s got the bigger body and he’s gotten away with brushing off pass rushers, creating time and space in the pocket, just because he’s such a huge, naturally strong human being. I’m not talking about weight room strong.”

On the heels of Roethlisberger undergoing major elbow surgery in September of 2019 and him playing a full season in 2020, Bayless went on to say that having another offseason of recovery might help the Steelers veteran quarterback in 2021.

“What if it was just the elbow surgery and you just on sheer rest through the offseason, you come back with a stronger arm that you trust more just because time healed it,” Bayless said. “Maybe you don’t rededicate. Maybe you don’t work out any harder than you used to work out, but you always got away with it because you just know how to play the position. His instincts are of the highest order to me. He gets it. He sees it and feels it.”

Bayless might be on board with Roethlisberger playing past the 2021 season and his arm getting stronger. His co-host Shannon Sharpe just doesn’t see a situation where the quarterback’s arm gets stronger for him to push the football down the field on regular basis. Bayless thinks a remedy for that would be the Steelers reviving their running game in 2021 and via the team selecting one of the top running backs in this year’s draft.

Will Roethlisberger ultimately play three more seasons? Odds are very good he won’t. In fact, odds are good that 2021 will be his final season in Pittsburgh barring him playing extremely well and the Steelers going deep into the playoffs. Roethlisberger’s four voidable years are set to do just that five days after the Super Bowl. So we should know by then if he’ll be back in Pittsburgh for the 2022 season.