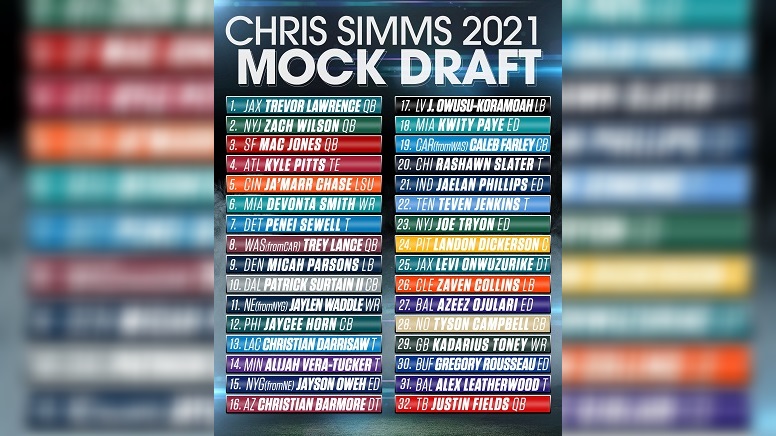 I know that many of you who read this site regularly have been waiting on pins and needles for Chris Simms of Pro Football Talk to drop his final mock draft of 2021. So with that, I am pleased the report that monumental event has finally transported. Boy, has it transpired, and includes quite few surprises.

Simms’ final mock of the first round of the 2021 NFL Draft, which you can see in its full glory in the image above, not only includes the Pittsburgh Steelers passing on Ohio State quarterback Justin Field at 24th overall, but Alabama running back Najee Harris as well. Instead, Simms has the Steelers selecting Alabama center Landon Dickerson at 24th overall in the first round.

Here is what Simms had to say about first when it comes to him explaining why he decided against giving them Fields at 24 overall.

“Listen, I thought about Justin Fields here,” Simms explained. “I didn’t do it. I didn’t do it. I know, this is real. Sorry, Justin. This is where I came to. I could certainly see Pittsburgh liking him, wanting him, everything like that. I just got into, like, I don’t know. It’s Ben Roethlisberger. I think this is his last year. I think they’re looking at it like, ‘Hey, we’re in a little window here. Let’s try to make it work one more year for Big Ben and company and play and go all in on this style of football.’ And I think they’re going to do like what we talked about, you’re going to see them getting to running the ball. Let’s protect it up. Big Ben, Tom Brady-Buccaneer style of football. I really think that’s what you’re going to try to see them do.”

After explaining away his decision to not mock the free-falling Fields to the Steelers, Simms then explained why he has Dickerson’s as the team’s first round selection.

“And that’s where I’m going to go offensive line here and I’m going to go Landon Dickerson, the center from Alabama,” Simms revealed. “I mean, to me, this is the best interior offense lineman in the draft. I mean, he is Pro Bowl-type center. I know he’s got the torn ACL. You know, from people I’ve talked to a lot of people think he’s going to be okay for the start of the season. He’s doing cartwheels and doing all that stuff. So, we’ll see. He’s a little bit of an injury risk that way but man, as a pure player, he is phenomenal. And they lost one of the Pouncey twins of course to retirement. To me it’s a real need and can get them back to a little more of a physical brand of football on the offensive side.”

Getting past the whole Fields dropping thing, along with several other questionable mock selections made by Simms, you can somewhat understand the reason why he mocked Dickerson to the Steelers. Sure, the Steelers would likely have to strongly consider stopping the Fields’ freefall should the Simms scenario play out the way he has it. That’s a whole different topic. There’s also the discussion about him having the Steelers pass on Harris, as well. All of that noted, Dickerson could be in play for the Steelers in the first round. Especially if the team is comfortable with his medicals, something we just don’t know for sure is the case.

The Steelers are likely to select a center at some point during the 2021 NFL Draft. When healthy, Dickerson is easily the best of the lot when it comes to this year’s class. In my honest opinion, either Dickerson will be on the Steelers’ draft board or he won’t be. It’s that cut and dry. If he is on their draft board, it would make sense to not limit him to a round. In short, if he’s on the Steelers final draft board, then serious consideration must be given to the team taking him in the first round if he’s still available. That’s even if Harris is still on the board at the time.