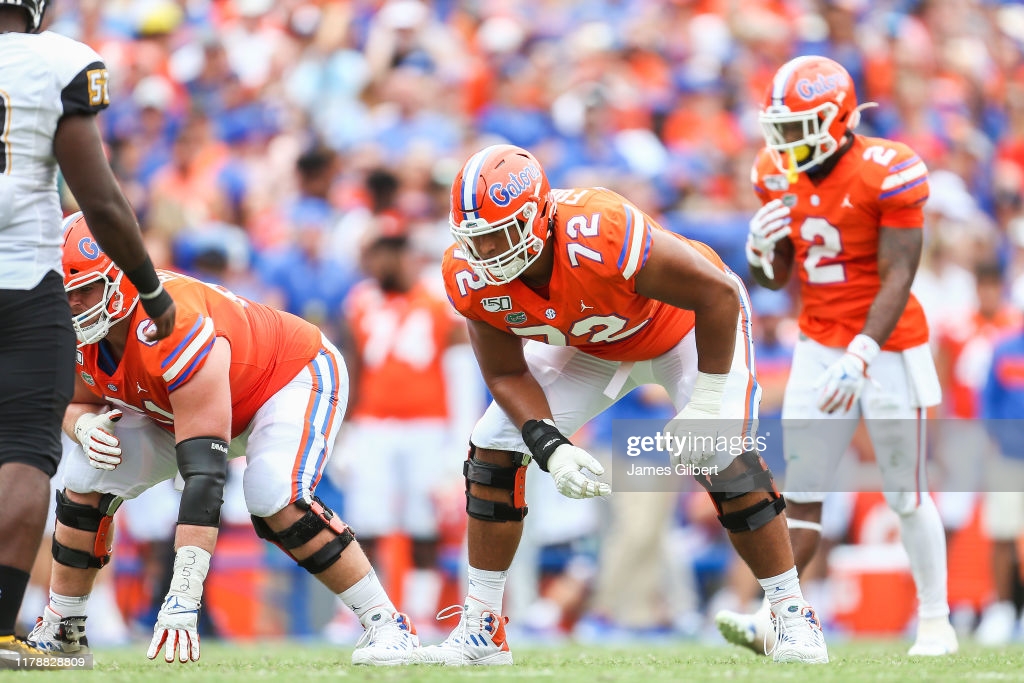 In his complete, league-wide seven round mock draft, NFL.com’s Chad Reuter has a clear focus for the Pittsburgh Steelers. And he’s not wrong about it. He has the team taking an offensive linemen in each of the first two rounds, starting with Oklahoma center Creed Humphrey at #24.

“Humphrey has everything a team would want in a center: He has strong hands (from his wrestling days), is athletic enough to move in space as well as provide plus pass protection, and will be the leader of the line. The Steelers need that sort of guy to replace the retired Maurkice Pouncey.”

Humphrey is regarded as the top center in this class and doesn’t carry the heavy injury concerns that Alabama’s Landon Dickerson has. Humphrey doesn’t quite have Dickerson’s size, but he fills out his frame well at 6042, 302 pounds with 32 1/2-inch arms. He’s got great grip strength, plays with a nasty demeanor, and tested as the most athletic center in draft history. The Steelers have a clear need at the position. Though they sent assistant O-line coach Chris Morgan to his Pro Day, neither Mike Tomlin nor Kevin Colbert attended. History says Humphrey won’t actually be the pick. Centers also typically slide in the draft, though it’s hard to imagine he’ll still be there at #55.

In the second round, Reuter focuses on offensive tackle and mocks Florida OT Stone Forsythe to the Steelers. He doesn’t offer explanations for selections past the first round. But Forsythe is a big body at 6080, 307 with 34 3/8-inch arms, a similar body type to Alejandro Villanueva. He started full-time the past two years for the Gators and also has a little bit of experience at guard, though his frame will keep him on the outside in the pros. Forsythe has been regarded as a “riser” (a.k.a. the media is catching up) late in this process.

In Round 3, Reuter continues to focus on offense, but addresses running back with Memphis’ Kenneth Gainwell. Gainwell may not be an every-down, feature back, but he’s a home run hitter who exploded in 2019. That year, he rushed for just shy of 1,500 yards and 13 rushing touchdowns while showcasing his receiving chops with 51 grabs and three touchdowns through the air. He opted out of the 2020 season after having four family members die of COVID. The biggest issue for Gainwell’s game is a little bit of stiffness for a big-play guy; he’s a linear runner overall, and that’s reflected in his agility times (4.46 short shuttle, 7.26 three-cone).

In the fourth round at pick #128, Reuter flips over to defense and addresses EDGE with Notre Dame’s Daelin Hayes. A popular pick for Pittsburgh in these full-fledged mocks, Hayes is a “hearts and smarts” guy who dealt with numerous shoulder injuries in his career. That limited him to just nine career sacks. He also didn’t test all that well at his Pro Day. But EDGE is a big need behind Alex Highsmith and TJ Watt, so it’s smart to address it.

With the team’s latter fourth round pick, Reuter mocks the Steelers taking Oklahoma State CB Rodarius Williams. Weighing in at 5116, 189 pounds, he ran a 4.53 40 with a 36.5-inch vertical, 10’3″ broad, and had a 8.13 Relative Athletic Score. His production, however, was pretty light with just two INTs, both coming during his sophomore year. He recorded just nine pass breakups over his final two seasons.

Late in the sixth round, the Steelers stay local with Pitt NT Jaylen Twyman. A stocky body at 6016, 301 pounds, he predictably tested poorly at his Pro Day. He didn’t play in 2020 but had an excellent 2019 season, finishing with 12.5 TFL and 10.5 sacks. Defensive line isn’t a need, but this is good value.

With Pittsburgh’s final two picks, they take TCU TE Artayvious Lynn (#245) and Oregon S Brady Breeze (#254). Tight end depth is terrible, and a seventh round pick doesn’t change much of that. Lynn caught just 22 career passes in college for 236 yards and two touchdowns. But he has good size at 6044, 254 pounds with 33 5/8-inch arms. Breeze didn’t play in 2020 (many PAC-12 guys didn’t) and was a one-year starter for the Ducks. He recorded 62 tackles with two interceptions in 2019. He seems more like a coverage safety, never recording a tackle for loss in school. Overall, he tested well at his Pro Day, running in the 4.5’s with a 38-inch vertical, 10′ broad, and put up 20 reps on the bar.

Overall, Reuter’s mock is… fine. The dedication to the offensive line is a good direction to go, though I don’t know if I love the idea of Forsythe in the second. Gainwell isn’t going to solve the Steelers’ hole for a feature back while the EDGE pick with Hayes in the fourth round is a bit underwhelming.

Here’s a recap of his picks, and the link to check out all 259 picks.