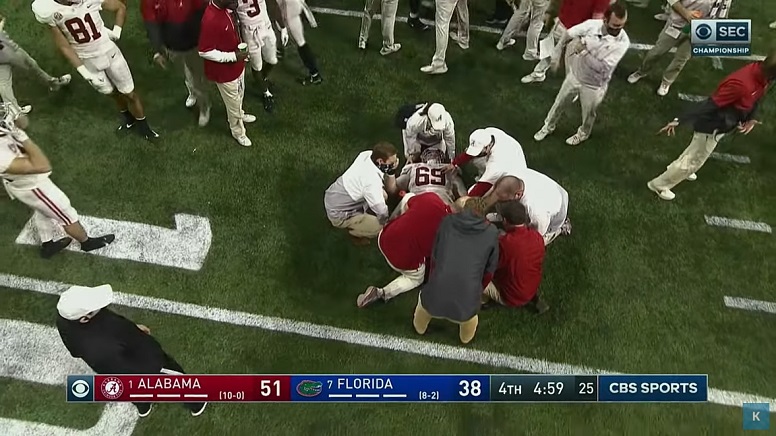 During a Monday interview on 93.7 The Fan, NFL analyst Tony Pauline proclaimed that the Pittsburgh Steelers have now narrowed their first-round selection in the 2021 NFL Draft down to three players, with Alabama center Landon Dickerson one of them. On Tuesday, however, Pauline reported on Pro Football Network that concerns about Dickerson’s longstanding medical history remain strong with the annual draft now less than two weeks away.

“Several teams I’ve spoken with tell me they would not draft Dickerson in the first five rounds due to medical concerns,” Pauline wrote on Tuesday. “The long-term effects of prior injuries are as much of a concern as the short-term possibility of suffering a major injury again. I’ve also learned that several teams gave Dickerson a medical grade of 3-minus off medicals, the equivalent of a C-minus in letter grades.”

Pauline went on to recap Dickerson’s injury issues he’s had to date that most recently included the Alabama suffering a torn ACL in the SEC championship game this past season.

“While many focus on the knee injury Dickerson suffered during the SEC title game against Florida, his medical past reaches much further back,” Pauline wrote on Tuesday. “Dickerson saw his freshman season at Florida State halted seven games in due to a right ACL injury. Each of his next two seasons were cut short by major ankle injuries. That’s four campaigns that ended prematurely due to season-ending injuries, most of which required surgery. That’s not a good history for a 335-pound lineman.”

Had Dickerson not suffered so many injuries to build up that medical history during his college career, he more than likely would be a slam-dunk first round selection in the 2021 NFL Draft. Those medical issues, however, are hard to ignore now, and especially when it comes to teams that might be considering selecting him in the second half of the first round.

Dickerson certainly checks nearly all the boxes needed to be the Steelers’ first-round selection in 2021. Particularly on the heels of veteran center Maurkice Pouncey retiring earlier in the offseason. The only box we have no idea if he’ll check revolves around the medical research the team has done on the former Alabama center. Generally, and at least dating back to 2000 when Kevin Colbert became the Steelers’ general manager, the team normally steers clear of players with lengthy injury histories when it comes to their first-round selections.

In his latest rankings of the top 100 players of the 2021 NFL Draft, longtime NFL.com analyst Gil Brandt has Dickerson ranked 23rd overall, which is 14 spots higher than he had the former Alabama center ranked in version 1.0 several weeks ago.

“Some people don’t value centers as highly as others, but anytime a guy can start multiple years at a high level in college, I think he’s pretty good — for me, that overpowers concerns about Dickerson’s health as he recovers from a knee injury suffered late in the 2020 season,” Brandt wrote about Dickerson on Monday.

On the surface, Dickerson appears to be a very feast-or-famine player when it comes to being an early-round selection in the 2021 NFL Draft. Should the Steelers pass on Dickerson at 24 overall, it would be interesting to see if they would pass on him again in the second round should he still be on the board come time for that pick.

“While it’s not a devastating grade, especially for a player with Dickerson’s history, it’s something that will most certainly flag him with teams,” Pauline wrote on Tuesday.