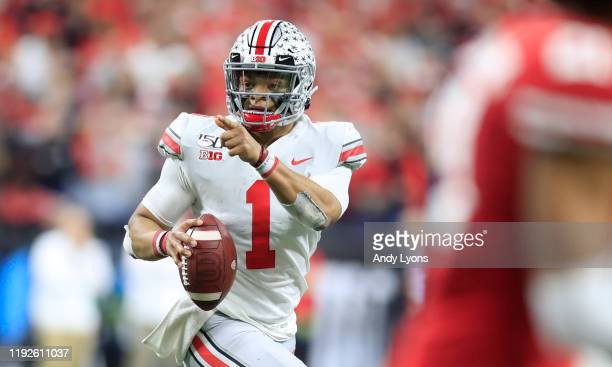 The Pittsburgh Steelers are a team in obvious need of a quarterback — at least in the opinion of most. There are few who believe that either Dwayne Haskins or Mason Rudolph will evolve into a true franchise player. Ben Roethlisberger may well be in his last season in the league.

That doesn’t mean they’re going to draft a quarterback, though they certainly could. But if the Steelers hope to land a high-end prospect, then it’s overwhelmingly likely that they’re going to have to make an aggressive move up via trade in the first round to get their guy. It would be a move like they made in 2019 for inside linebacker Devin Bush.

Count Pro Football Focus as being in the camp that is in support of Pittsburgh doing this. And they want them doing it for Ohio State quarterback Justin Fields. Ben Linsey lists the Steelers as one of three teams, including the New England Patriots and the Washington Football Team, who should move up into the top 10 to grab a quarterback. He writes, in part, on Pittsburgh:

The Steelers have the longest odds on this list to move into the top 10 for a quarterback, given that the highest pick they have to offer in return in this year’s draft is 24th overall. There is a recent precedent for them making a big first-round jump, though. Pittsburgh moved up from 20th to 10th overall in the 2019 NFL Draft to select Michigan linebacker Devin Bush, giving up an additional second- and third-round pick in the process. The Steelers could, and should, make a similar leap if a quarterback they believe in falls within their range.

Fields could be that quarterback.…

Trading up for a quarterback would mean pushing those needs further down the priority list in a year the Steelers look to be making one last run at a Super Bowl behind Ben Roethlisberger, but it’s worth wondering how realistic an opportunity the team has to make that run.…

They’ll also have to replace three of five starting offensive linemen with no guarantees that Roethlisberger will be able to right the ship at 39 years old, not nearly as mobile as he once was. His 57.3 overall grade across his final five games of last season ranked 30th among 32 qualifying quarterbacks.

There is also no guarantee Pittsburgh will have another opportunity at a quarterback of Fields’ caliber outside of the top five in upcoming years, should he be the one to slide. The Steelers will have to shell out big-time money to free agents such as T.J. Watt and Minkah Fitzpatrick next offseason. Neither Roethlisberger, Mason Rudolph nor Dwayne Haskins is under contract, and none of those three figure to be a strong starting option for 2022 and beyond.

There have been a number of players who have been portrayed as being the favorite to be picked third. The safe expectation this year is that the first three picks in the draft will be quarterbacks. The Jacksonville Jaguars are an inevitability to draft Trevor Lawrence. The New York Jets just traded their quarterback, and the San Francisco 49ers traded up to the third spot already.

Fields could end up being the quarterback going to San Francisco. Or it would be Mac Jones. Or it could be Trey Lance. I’m not sure I believe enough in any of them to actually make a trade up for them, personally speaking.