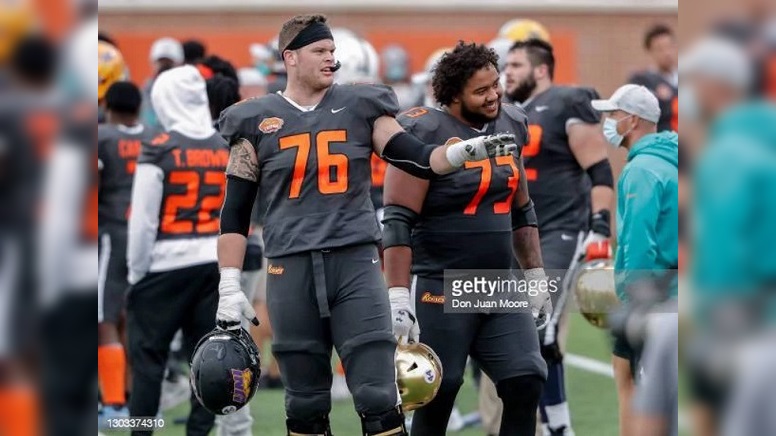 One tackle that the Steelers reportedly like is Northern Iowa’s Spencer Brown. In fact, during a recent live stream that included Trey Wingo of The Pro Football Network, draftnik Tony Pauline talked about the Steelers liking Brown on the heels of a topic that centered around the Tennessee Titans possibly trading up in the first round of the draft to get in front of the New York Jets so they can select Oklahoma State tackle Teven Jenkins.

“Spencer Brown is a guy who a lot of people thought third, fourth round,” Pauline told Wingo. “He’s moved into the second round and I know that the Pittsburgh Steelers like him. If the Pittsburgh Steelers, who need offensive line help, lose out on Teven Jenkins in Round 1, I think that’s a guy they could look to in Round 2, if he’s available, if he’s still on the board because he may go mid-second round.”

Brown said at his Pro Day media session that he has had some sort of contact with the Steelers during the pre-draft process.

“I guess you gotta define contact,” Brown said. “I mean, they’re here today. I have meetings set up with them. I imagine I’ll have a lot more meetings with many more teams in the future. I can’t say interest or if they’re interested in me, I don’t know. I can’t really define that for you.”

We know that Steelers college scouting director Phil Kreidler and new offensive line coach Adrian Klemm were both at the Northern Iowa Pro Day, so that is pretty significant.

As for Pauline indicating that the Steelers have interest in drafting Jenkins in the first round of this year’s draft, that seems very unlikely to happen at this point. Neither Steelers’ general manager Kevin Colbert nor head coach Mike Tomlin attended this year’s Oklahoma State Pro Day. It would break a huge streak that has been in place since 2010, should the Steelers draft a player in the first round that didn’t have his Pro Day attended by at least Colbert.

Brown does make a lot of sense for the Steelers in the second or third round of the draft. Brown checks a lot of boxes to boot.