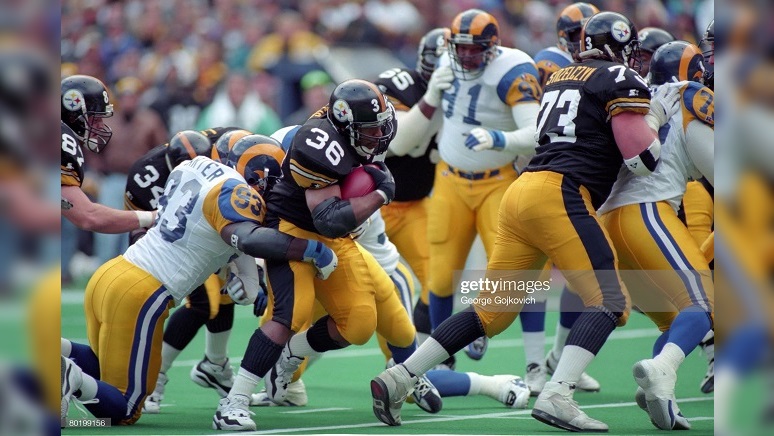 On this day 25 years ago, the Pittsburgh Steelers made one of the best trades in franchise history as they sent a second round pick in the 1996 NFL Draft and a fourth round selection in the 1997 NFL Draft to the Los Angeles Rams in exchange for running back Jerome Bettis, along with a third round pick. The trade was made during the 1996 NFL Draft, and the effects of it were felt all the way through the 2005 season.

At the time the deal was made, the Rams had just drafted running back Lawrence Phillips out of Nebraska in the first round, because it was decided that Bettis no longer fit their offensive scheme needs.

Bettis rushed for 1,431 yards and 11 touchdowns in his first season with the Steelers in 1996. He won Comeback Player of the Year, made the Pro Bowl, and was a first-team All-Pro.

Bettis also managed to exact revenge against his former team in Week 10 of that 1996 season by rushing for 129 yards on 19 carries and two touchdowns as part of the Steelers’ 42-6 home blowout win over St. Louis. Below is a clip of Bettis’ 50-yard rushing touchdown from that game at Three Rivers Stadium.

In Pittsburgh with the Steelers, Bettis rushed for over 1,000 yards in his first six seasons with the team that traded for him and scored 40 touchdowns on the ground.

Not only did Bettis quickly fit in perfectly with the Steelers and their offense, but he also went on to have a Hall of Fame career that ended with him rushing for a total of 10,571 yards and 78 touchdowns in his 10 seasons in Pittsburgh. Bettis finished his long NFL career with 13,662 rushing yards and 91 touchdowns in addition to catching 200 passes for 1,449 yards and 3 touchdowns in regular season action.

Bettis’s storied career came to an end after the Steelers won Super Bowl XL in his hometown of Detroit in February of 2006. The Super Bowl win was against the Seahawks by a score of 21-10. He was ultimately inducted into the Pro Football Hall of Fame in 2015.

As for Phillips, he ended up being a bust as a first-round selection, and only played two seasons with the Rams and a total of four in the NFL. He amassed just 1,453 rushing yards and 14 rushing touchdowns for his NFL career.

“I got a chance to talk to Coach (Bill) Cowher,” Bettis recalled of the trade via Teresa Varley of steelers.com. “My rookie year the Steelers came to Los Angeles and we beat up on them pretty good and I had a great day running the ball. The first thing he said to me on the phone was ‘We just traded for you. If you can’t beat ’em, join ’em. I remember you beat up on us your rookie year and I’m glad to have you.’ It was great to hear and to be going somewhere they wanted me. That worked out pretty well.”

Jerome Bettis: "They said I was done, over with, finished. Yeah, wait 'til they get a load of me."

The longest career run by Jerome Bettis as a member of the #Steelers came in 1996 and against the Rams, the team that traded him to Pittsburgh.

FLASHBACK FRIDAY: #Steelers opening drive against Rams in 1996 Jerome Bettis had 8 carries for 38 yards and a TD. Those runs are below. He ended the game with 19 carries for 129 yards and 2 TDs with a long of 50. pic.twitter.com/gbr2eCu08G