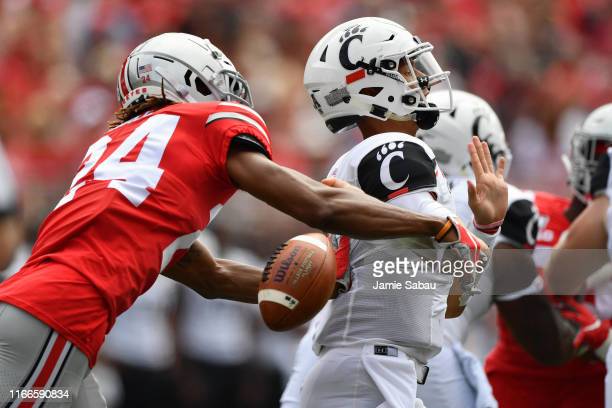 Everyone is allowed a draft crush. I’m now going official on my favorite potential steal:

There are two elephants in the room:

In other words, everything I’ve read says that Shaun Wade would have an all-but-universal grade as a Round 1 prospect if 2020 had never happened. Round 2 at the worst. The current, Day 3 projections amount to punishment for his decision to tough things out even at the cost of putting out some lesser film.

I have not taken the time to study his older games, and want to be clear that this is about looking at the draft community rather than the player. I can’t vouch for the accuracy of those early raves; but I do know a lot about the whipsaw behavior of your general draftnik. People described Wade in over the top terms like “The next Minkah!!!” He probably didn’t deserve that level of excitement.

In any case, draftniks react to early raves the same way every time. “Oh yeah? He ain’t all of that! As a matter of fact, he’s got all these warts and…” I see it all the time when trying to build the Big Board. In the normal course, Wade would have started this draft season with a Round 1 grade if he’d quit on 2020 due to COVID; his public grade would have then collapsed to Round 3 as the critics dug in; and we’d have settled on a consensus grade no higher than the late first, with notes that Round 2 would be the safer bet.

We now know that Wade did more than play through the pandemic. He battled against a nasty turf toe for all of 2020, an injury bad enough that he could not participate in Ohio State’s Pro Day a quarter-year after the CFB season ended. I believe that offers a sufficient, and more convincing, explanation for his 2020 issues than a sudden lack of talent.

His agent reports that Shaun Wade just ran a 4.43 dash at his April 14 Pro Day. He also posted numbers like a 37 1/2” vert and a 10’3” broad jump. We need to apply some salt for both because of the source and the setting, but those are still good numbers. They haven’t been disputed, and his failure to do any of the agility drills may actually support his case. Turf toes are to the foot what high ankle sprains are to the joint just above. Straight-line efforts are one thing, but twisting and turning risked a re-injury. I’m a little surprised that he risked even the dash.

So let’s look at what this means.

This injury was not a small deal.

The pattern continues. While we are at it:

Yeah. “Oh.” Owen’s scouting report ended on a Round 4-5 grade, which is consistent with a lot of the public boards. But you must account for Wade’s turf toe injury, and its severity.

My true favorite for this class is center Landon Dickerson. Wave your magic wand to remove his medical red flag and you’d have the perfect target, at the perfect position, for the perfect team, at the perfect time. The problem is that you need to wave that wand four different times for 2016, 2017, 2018, and 2020. I can defend his chances (heck, I just did), but I can’t in good faith just wave them away.

Shaun Wade’s situation is different. He’s being considered as a Day 3 prospect, and I think that is absurd. He had one real injury that he toughed his way through, and it isn’t the sort of problem that recurs. There is no way he’d be down in Round 4 if 2020 had never happened, or if he’d quit on his team when the injury occurred. None. Especially for a team with Pittsburgh’s preferences and needs. So I am calling my shot.

If Shaun Wade falls to pick #87 in Round 3, he should be the selection.