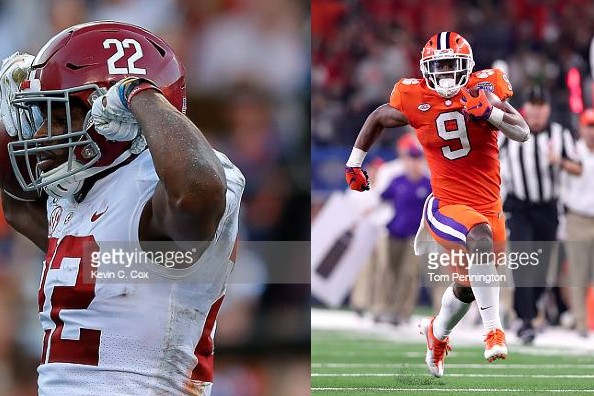 We’ve spent the last couple of days examining and loosely debating who the top running back in the 2021 class will be – Alabama’s Najee Harris or Clemson’s Travis Etienne. So I’ll pose the question more directly to you. Who would you prefer.

Harris is bigger and more powerful but Etienne is more explosive. They both played in friendly offenses, put up big numbers, and are fluid, productive receivers. As full-time starters, Harris since 2019, Etienne since 2018, their stats were impressive and actually pretty similar. Here’s a comparison.

Both guys have their risks and downsides. Both players have a fair amount of carries. Harris sits at 638, Etienne 686. Harris is already 23 and Etienne spent four years in college, surprisingly deciding to return for 2020 and then having his worst year. Harris had the luxury of playing in a juiced offense with first round picks all around him. His offensive line was named the best in football, his two receivers in 2020 will be first round picks and so will his quarterback.

Etienne also played in a high-powered offense that give him plenty of runway into open space. He noticeably struggled when Trevor Lawrence wasn’t in the lineup (2.95 YPC in the two games he missed last year) Etienne doesn’t have as much power as Harris and had a nasty fumbling habit show up in 2020.

We know the Steelers have shown interest and probably like both players. But we don’t know who is at the top of their board should both be available at #24. I’m still in the camp they will take Harris and I think it’s the right decision but his name can’t be written in pen.

So I’ll ask you below. In your personal opinion, who is the better player? Who would you rather have – Harris or Etienne? I’ll tally up results from you guys throughout the day.

(Update 4:26 PM): Going to stop counting fan votes. Finally tally is shown above. In terms of percentages, it looks like.

So Harris wins in runaway fashion.

Here were some of the comments in favor of either player.

I have to go with the weight advantage of Harris. With the OL in shambles and starting over, we need the size to help push the pile as needed. – Rick McClelland

Harris, his catching ability is all world – pdmjr

I would take Harris over Etienne but not sold on either. Harris is good out of the backfield. Lacks the home run speed when I watch his highlights. Able to create holes on his own. – Jimmy Sams

Harris. Need someone who can make yardage out of no holes, because our O-line ain’t opening any holes soon. Harris has the potential to be a Derrick Henry type. Etienne has breakaway speed but not really the elusiveness. – DoctorNoah

Etienne. His stats and measurables are in line with running backs that have transitioned to stardom most frequently – kdubs412

Etienne. His contact balance is fantastic and his power is underrated. He is a master at varying his speed and approach, which are extremely subtle nuances to his game that are hard to coach.  – Jon Crissinger

Travis Etienne. I want a ‘take it to the house every time touches ball threat’. – jconeoone C

Ettienne just merely for the explosion aspect of his game – Flashback