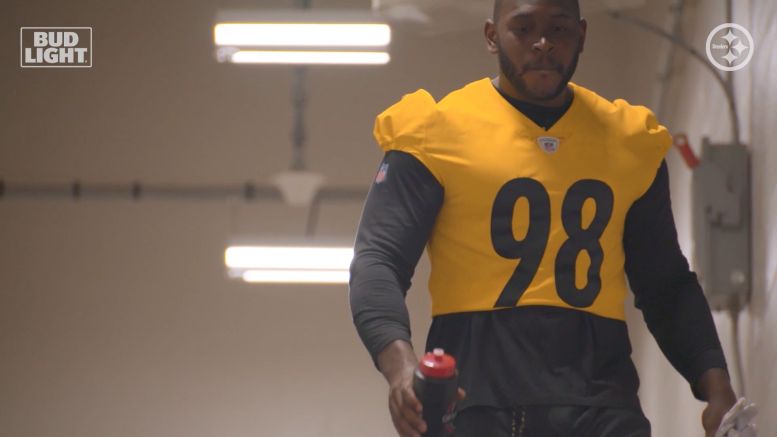 While it does happen from time to time, you don’t often see a situation in which a player is released by a team during an offseason, only to see him re-sign a short time later. It probably happens maybe two or three times a year, on average, and this year, the Pittsburgh Steelers were one of those teams, circling back to pair up with their long-time linebacker, Vince Williams.

Even though they let him and his scheduled $4 million base salary go during a badly cap-strapped offseason, they and Williams worked out that continuing their relationship on a more affordable contract was the best path for both as he winds down his career. Despite the brief separation, he remains a very-well respected member of the team.

“Vince Williams is a Pittsburgh Steeler,” head coach Mike Tomlin told members of the media on Monday during the team’s pre-draft press conference. “Vince Williams bleeds black and gold, and really his decision to come back is really just an example of an opportunity for him to display that. I can’t say that I’m surprised by that, knowing what I’ve known about Vince and his level of commitment, not only to the game of football but to us and how we go about our business.”

Williams first came to Pittsburgh via Florida State through the sixth round of the 2013 NFL Draft. He scraped and clawed to make the 53-man roster that year, but actually ended up playing a substantial number of defensive snaps because starter Larry Foote suffered a season-ending injury in the opener.

Despite his play as a semi-starter, the Steelers invested a first-round pick in Ryan Shazier the following year, rendering the big buck a backup once again, something that he took hard initially but gradually came to accept, especially as his bond with Shazier tightened.

Lawrence Timmons’ departure in 2017 opened the door for him to take a starting job next to Shazier, posting a career year with 89 tackles, 11 tackles for loss, and eight sacks, among the most by an off-ball linebacker in Steelers history for a single season.

He has started 36 of 42 games over the past three seasons, recording 201 tackles during that time with 26 for loss and 10 sacks. He briefly lost his starting role in 2019 after they signed Mark Barron in free agency and drafted Devin Bush.

This year, he returns possibly competing for the starting job, or for playing time, with Robert Spillane, who started seven games last season for Bush while he was injured. When the team decided to initially release Williams, it was assumed that Spillane would start in his place.

How much he plays on the field, however, is not a proper reflection of his impact on the team, which has long transcended on-field achievements. He is one of the emotional leaders of the locker room, the sort of player who personifies, as Tomlin intimates, what it is to be a Steeler.