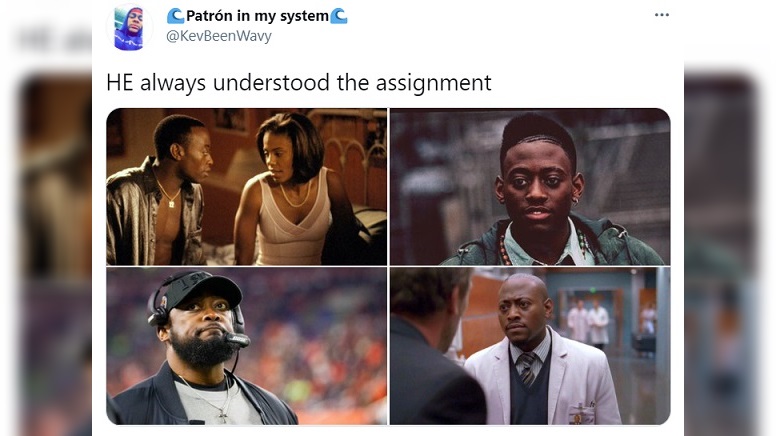 Pittsburgh Steelers head coach Mike Tomlin was trending on Twitter for most of Thursday, and it is due to nothing related to football or anything he’s said recently. No, Tomlin is trending because he’s Omar Epps’ doppelganger.

A well planned tweet from Twitter user ‘Patrón in my system’ included three pictures of Epps, an actor, and one of Tomlin. The two have forever been considered each other’s doppelgangers, and both are right around the same age as well.

HE always understood the assignment pic.twitter.com/ntca8tAyEY

After Tomlin became the Steelers head coach in 2007 his national profile rose. Epps was already an established actor at the time, having already appeared in numerous movies and TV shows. The doppelganger discussions quickly surfaced.

The Tomlin-Epps doppelganger talk moved to another level in 2009 when the television medical drama “House” got in on the comparison of the two. In the Season 6 episode, “Ignorance Is Bliss,” Dr. Gregory House, who was played by actor Hugh Laurie, delivers a Tomlin-inspired joke in the direction of Dr. Eric Foreman, who was played by Epps.

“I got all my starters back, plus a couple of first-class free agents. I feel like Mike Tomlin,” House says before looking in the direction at Foreman. “Probably not as much as you do, but you get the idea.”

The tweet hit the right social media chord on Thursday and even I retweeted it earlier in the afternoon. At the time of this post, it has been retweeted over 10,000 times and favorited over 56,000 times.