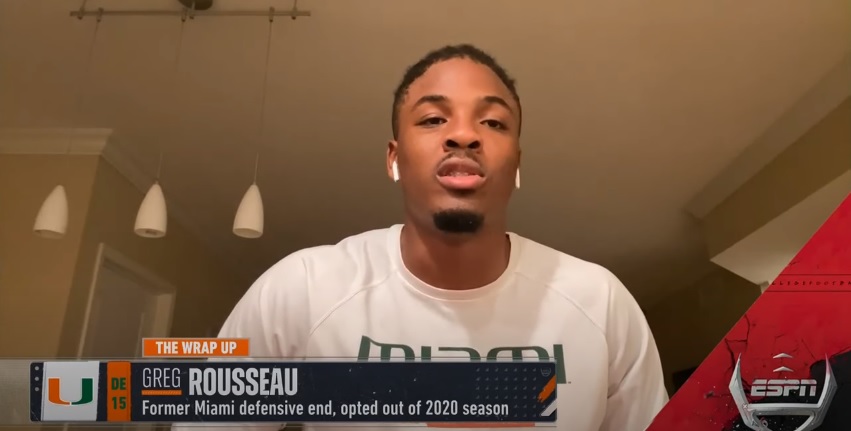 It’s safe to agree that the Pittsburgh Steelers have something of a need at the outside linebacker position after losing two players from last season, with both starter Bud Dupree and reserve Ola Adeniyi signing with the Tennessee Titans. The debates lies in how big that need is.

Should they have the position grouped in with their first-round options? There might only be a couple of 3-4 edge players who are actually in contention to go that high. But we have seen their names in mock drafts heading to Pittsburgh.

If you ask NFL analyst Matt Williamson, however, one of them, Gregory Rousseau out of Miami, would not be a good fit in Pittsburgh. “Rousseau is someone I would frown upon,” he told Tim Benz of the Pittsburgh Tribune-Review. “I think he is more of a 4-3 hand-in-the-dirt guy. Not super twitchy.”

Rousseau projects as a possible late Day 1 pick, echoed by our own draft profile by Jonathan Heitritter. At 6’7” and 265 pounds, however, with a frame to fill out, he doesn’t really profile as a perfect match for what the Steelers prefer, which Heitritter agrees with.

Last month, one of Pro Football Focus’ eight thousand mock drafts landed Rousseau in Pittsburgh in the first round. They argued that he “can immediately step in as a chess piece in Pittsburgh’s defense while he develops his pass-rushing skill set.”

While the Steelers have T.J. Watt, their All-Pro left outside linebacker, the opposite side now vacated by Dupree is a bit of a question mark. Second-year Alex Highsmith is expected to take over there after starting the final six games of the 2020 season following Dupree’s knee injury. But there is still much we don’t know about him.

One player Williamson could see as a fit for the Steelers in Round 1 isn’t so far away, and that would be Jayson Oweh out of Penn State. “He’s a defensive end who ran a 4.37 (40-yard dash). That doesn’t happen,” he told Benz. “He had no sacks last year, but he was disruptive. It’s not like he doesn’t show up on tape and he had some sack production in the past.” He added that “his upside is through the roof,” and that “his traits scream first-round pick.”

Alex Kozora put up our draft profile on Oweh back in February, but didn’t have nearly as high an opinion on him, concluding that he projects more as a Day 3 prospect. Given his athletic traits, however, it feels likely that somebody will give him a chance earlier than that. Potentially much earlier.