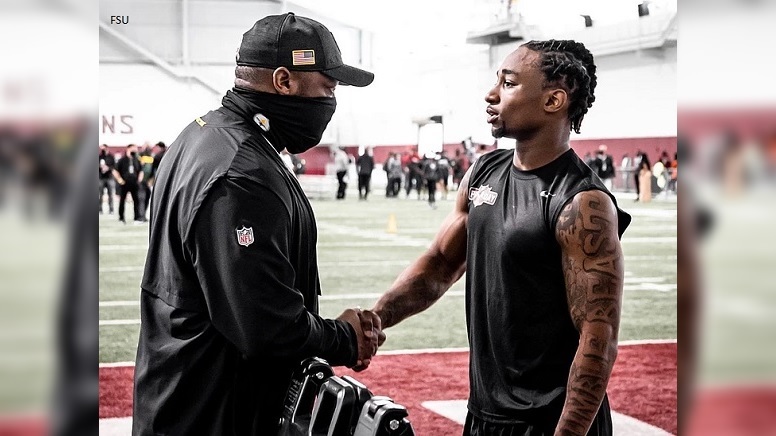 The last time that the Pittsburgh Steelers selected a cornerback in the first round of a draft was in 2016, when they took Artie Burns out of Miami at 25th overall. That selection didn’t turn out very well at all for the Steelers, who have had their fair share of issues for quite some time when it comes to drafting cornerbacks.

Could 2021 be the year the Steelers attempt to select another cornerback in the first round? It’s certainly a plausible notion. And if they do, Florida State product Asante Samuel Jr. might just wind up being that player. He even admitted that he has gotten a good vibe from the Steelers during the pre-draft process during his recent interview on CBS Sports’ “All Things Covered” show with former NFL cornerbacks Patrick Peterson and Bryant McFadden.

“Actually, the Steelers, the Browns and the Jets,” Samuel Jr. said during his interview, when asked which teams he’s received the best vibe from after the multiple Zoom calls he’s had with NFL teams so far during the pre-draft process.

The New York Jets obviously won’t be selecting Samuel Jr. with their currently-scheduled second overall pick, but they do have another first-round selection at 23rd overall. The Steelers pick 24th overall, while the Cleveland Browns are scheduled to pick 26th overall in the first round. So, if Samuel Jr. makes it to the Jets’ second of two first-round selections, it will be interesting to see how things transpire from there.

The Steelers do seem to have some significant level of interest in Samuel Jr., as both general manager Kevin Colbert and head coach Mike Tomlin were at the Florida State pro day just a few weeks ago. That’s why our very own Alex Kozora has him on his narrowed-down list of 15 potential first-round options for the Steelers in 2021, now that the bulk of the pro days have been completed.

While the Steelers were able to re-sign cornerback Cameron Sutton this offseason, they lost their other unrestricted free agent cornerback Mike Hilton to the process as he signed with the Cincinnati Bengals. On top of that, the Steelers parted ways with veteran cornerback Steven Nelson right after re-signing Sutton. As for the Steelers’ other starting cornerback, Joe Haden, he is now in the final year of his current contract, so 2021 could very well be his final season in Pittsburgh.

In his three seasons a Florida State, Samuel Jr. registered 97 total tackles, four interceptions, 29 passes defensed, a forced fumble and two fumble recoveries in 31 games played in. He allowed a 46.2 passer rating in coverage last season, the lowest in the 2021 Draft class, according to Pro Football Focus. He is also the son of former NFL cornerback Asante Samuel, who was a four-time Pro Bowler, a one-time first-team All-Pro selection, and two-time Super Bowl champion during his career.

“It’s a blessing to have an NFL father,” Samuel Jr. said during his recent interview with Peterson and McFadden. “I mean, [there’s] a lot of advantages to it. But disadvantages, there’s people trying to compare me all the time to him, thinking I’m him, thinking we just the same person. We kind of the same, but we are very different in many ways.”