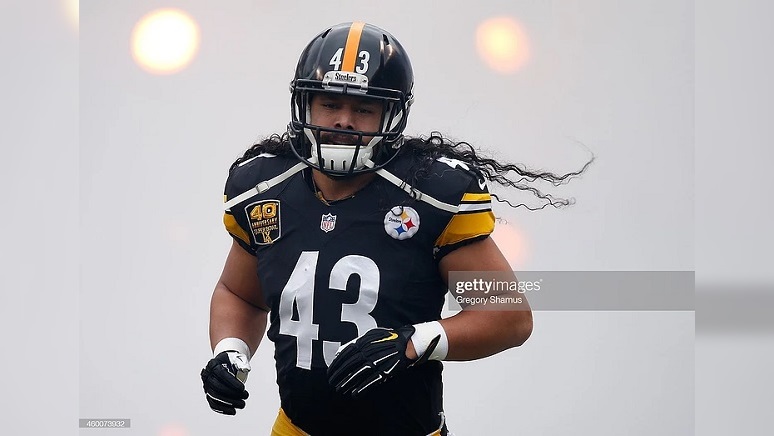 While it seems just like yesterday that the Pittsburgh Steelers selected safety Troy Polamalu in the first round of the 2003 NFL Draft out of USC, on Monday he turned 40 years of age.

Polamalu will be inducted into the Pro Football Hall of Fame as a member of the 2020 class this summer. He is being remembered for his great playing career with the Steelers on social media on Monday, because it is his birthday.

Polamalu’s former Steelers teammate, defensive end Brett Keisel, even took to Twitter on Monday to say he wishes he could give the Steelers’ former safety a big birthday hug like he did after a pictured game-clinching play against the Baltimore Ravens. Then Keisel wished Polamalu a happy birthday.

Wish I could give you big Birthday hug like after this game clinching play. Happy Birthday ⁦@tpolamalu⁩ pic.twitter.com/VFwHv1ASLl

Polamalu retired in April of 2015 after playing 12 seasons with the Steelers. He played in 158 regular-season games for the Steelers, and also appeared in 15 playoff games and three Super Bowls. During that span, Polamalu was an All-Pro five times and made eight Pro Bowls.

Polamalu, voted the AP NFL Defensive Player of the Year in 2010, recorded 770 regular-season total tackles and 32 interceptions during his long career in Pittsburgh. He also returned three regular-season interceptions and two fumbles for touchdowns. He had three career playoff interceptions to his credit. And one of those, which he returned 40 yards for a touchdown, came in the fourth quarter of the 2009 playoff game win over the Baltimore Ravens.

Polamalu missed four games in his final season due to a knee injury. A calf injury in 2012 also limited him to playing in seven games that year. The 2014 season was the first that Polamalu failed to record an interception since 2007. He still, however, recorded 61 total tackles and forced one fumble.