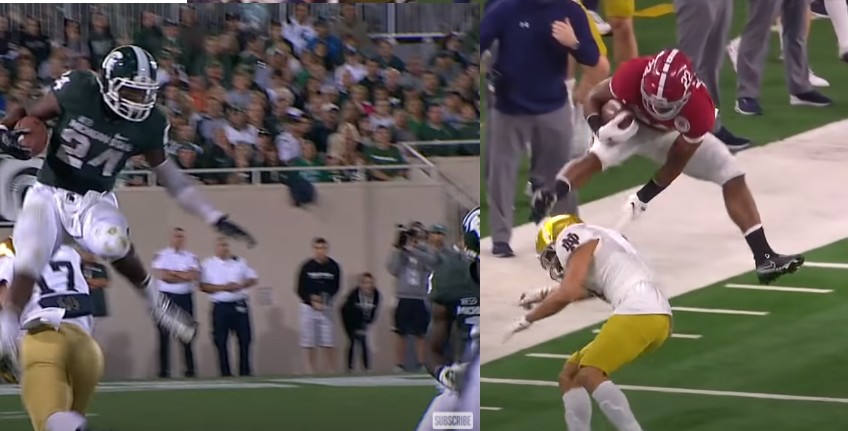 NFL Network analyst Lance Zierlein went on NFL Total Access to break down the Pittsburgh Steelers’ first round strategy. Most of the information was things we’ve talked about a hundred times and things you already know. The Steelers could certainly take a RB at #24. Duh.

But Zierlein did have one noteworthy nugget of information in his report. He says he spoke to a former Steelers’ RB coach who compared Najee Harris to Le’Veon Bell.

Insight into the way the Steelers approach their draft…. pic.twitter.com/3sBuyGx6oN

Here’s the quote: “A former RBs coach for the Steelers told me Najee reminds me of Le’Veon Bell when Le’Veon Bell was drafted. I thought that was very intriguing.”

Zierlein, of course, doesn’t name names, but there’s only a couple of realistic names who that may be. It could be James Saxon, now RBs coach for the Cardinals, or it could be Kirby Wilson, now serving that role for the Raiders. Wilson was the Steelers’ RB coach when the team drafted Bell in 2013 but they only worked together for one season. Saxon was hired to replace him.

Of course, whoever the source was doesn’t have any bearing on the team’s current draft plans. But comparing Bell to Harris is on the money. We made that point in our report way back in February.

“This is a tall comparison to make but man, Harris reminds me so much of Le’Veon Bell. Near identical frames, run styles, excellent receivers, all-around game, they both are even impressive hurdlers. Harris doesn’t quite show Bell’s wait-wait-wait patience but everything else is a mirror image.”

It’s probably common for many teams philosophically, but the Steelers have history of replacing great players with new ones who have similar skillsets. For example, Diontae Johnson received plenty of Antonio Brown comps when coming out of the draft. The Steelers viewed Devin Bush as similar to Ryan Shazier when moving up to draft him. Harris, in the team’s mind, could be their next Bell.

Zierlein did point out he would prefer taking Etienne for his home run ability. There’s no arguing Etienne is the bigger play threat than Harris. We’ll see what the Steelers decide come April 29th. As our poll showed this morning, the vast majority of Steelers fans prefer Harris.