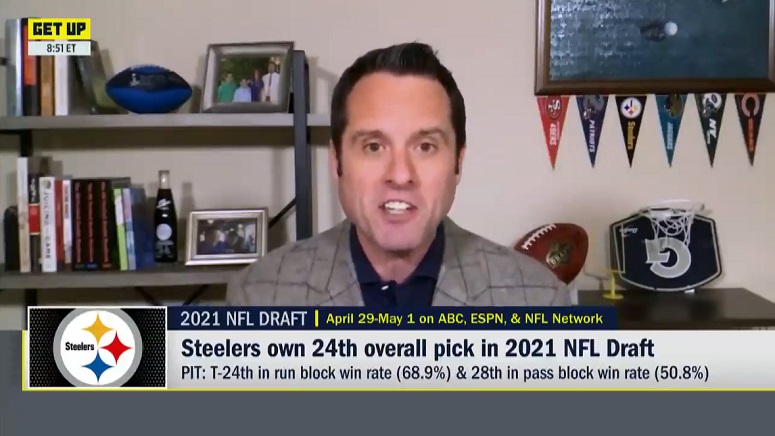 Will the Pittsburgh Steelers select a quarterback at some point during the 2021 NFL Draft, despite the team currently having four of them under contract? Dan Graziano of ESPN certainly thinks there is a chance of that happening, and he said as much again on Thursday.

“I think they probably will look to address quarterback at some point in the draft, but probably not early,” Graziano said on ESPN’s Get Up!

As part of his extended response, Graziano talked about how he thinks the Steelers will address the offensive line and quite possibly even the center position in the first round of the 2021 NFL Draft, and then running back in one of the next two rounds. He thinks a quarterback might be drafted by the Steelers maybe in the middle rounds.

“RC’s [Ryan Clark’s] idea about offensive line help in the first round makes a ton of sense,” Graziano said. “When you look at the Steelers in their history, their center just retired. Center’s not a really exciting first round pick, but the Steelers really prioritize that position. The Steeler centers go to the Hall of Fame. When you look at their history of that position, it matters a lot. People want to put a running back there, if you’re Pittsburgh, I think you see the center position is more important to the run game than the running back is.

“And so, I wouldn’t be surprised to see them go that way or offensive tackle in the first round. Maybe think about finding that running back in the second or third. And then as the draft goes along, you know, do something kind of like they did with Mason Rudolph a few years ago if they find a guy they like. Rudolph’s in his last year of his contract, so they may be looking for another guy like that to kind of take a long-term flyer on.”

If the Steelers do address the quarterback position at some point during the draft, it would likely include them possibly selecting Texas A&M quarterback Kellen Mond or Jamie Newman out of Wake Forest. One of those two would make the most sense. The Steelers currently have quarterbacks Ben Roethlisberger, Mason Rudolph, Dwayne Haskins and Joshua Dobbs all under contract ahead of the draft taking place. Pittsburgh has none of the four contracted past the 2021 season currently, however.

As for Graziano thinking the Steelers might draft a center instead of a running back in the first round, one would think that if they did go that route, the selection would be either Landon Dickerson out of Alabama or Oklahoma’s Creed Humphrey. Dickerson, however, has medical red flags attached to him coming out of college.