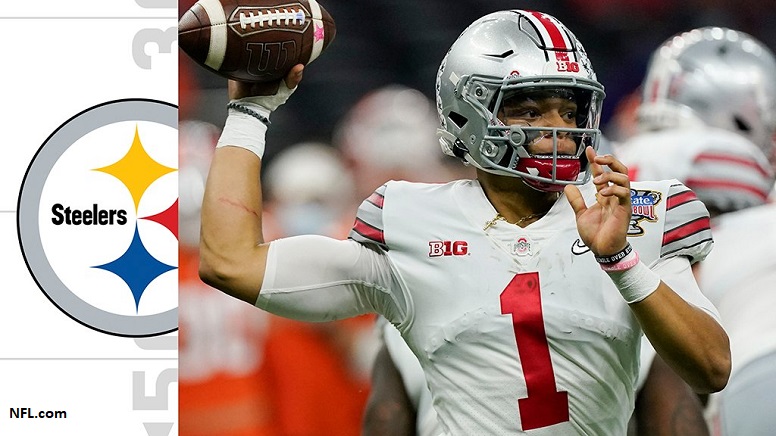 Former NFL general manager Charlie Casserly of the NFL Network has now released his second mock draft of the 2021 offseason. And just as he did in his first offering, he has the Pittsburgh Steelers landing Ohio State quarterback Justin Fields in the first round at 24 overall.

Below is why Casserly remains convinced the Steelers will land Fields.

“Pittsburgh is the perfect spot for Fields to develop behind a Hall of Fame quarterback for a year before taking over the offense.”

Well, that certainly seems to be a mailed-in response from Casserly. Below is what Casserly wrote about mocking Fields to the Steelers in his first offering back in late February.

Even though the Steelers and Ben Roethlisberger are planning to continue their partnership, I don’t see the veteran playing much longer. In a stunning turn of events, Fields slides all the way to No. 24 (obviously, it won’t be a surprise if he goes much earlier than this) and Pittsburgh pounces at the chance to land a talented successor for Big Ben. Sitting behind a future Hall of Famer for a year is a prime spot for the Ohio State prospect.

To hear the so-called experts talk these last few weeks, Fields will be long gone by the time the Steelers 24th overall selection in the first round rolls around. I mean, if he does fall that far, the Steelers most certainly would consider drafting him. At the very least, you would think the Steelers would entertain trade offers from other teams wanting to move up to select the Ohio State product at 24th overall.

Fields had his second Pro Day on Wednesday. While the Steelers may have had someone on hand to observe it, it sure doesn’t sound like any of the members of the coaching staff were present. Steelers general manager Kevin Colbert and head coach Mike Tomlin were both at the first Ohio State Pro Day not long ago, so there is that. That said, those two don’t miss the Ohio State Pro Day. Sure, cameras caught Tomlin a few times having brief chats with Fields during his first Pro Day. But I am sure the Steelers’ head coach chatted with several Ohio State Pro Day participants in a similar manner.

As of Thursday morning, the Steelers have four quarterbacks under contract for the 2021 season, after bringing back last season’s third-stringer, Joshua Dobbs. While Dobbs’ Wednesday re-signing doesn’t totally prevent the Steelers from drafting a quarterback this year, and the same goes for the early-offseason signing of quarterback Dwayne Haskins, the former first-round draft pick of the Washington Football Team just a few short years ago, it seems like the team isn’t counting on selecting another player from that position. Unless something extreme were to happen, such as Fields falling in their laps.

Fields, 21, registered 5,373 passing yards with 63 touchdowns and nine interceptions, to go along with 867 rushing yards and 15 touchdowns in his two seasons at Ohio State after transferring there in 2019 after playing his freshman season at Georgia. He was a 2019 finalist for the Heisman Trophy after putting up record-setting numbers for the Big Ten champion Buckeyes. He announced in January that he was declaring for the 2021 NFL Draft as an underclassman.